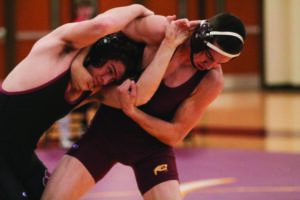 CHAMP: Cherokee’s Anthony Toineeta (right) gets Asheville’s Ben Pitrolo in a lock in the semifinals of the 160lb. division at the Chief Osley B. Saunooke Wrestling Tournament at the Charles George Memorial Arena on Saturday, Jan. 14. Toineeta went on to pin Pitrolo and advance to the finals where he pinned McDowell’s Connor Good to take the championship. (SCOTT MCKIE B.P./One Feather photos)

Cherokee High School hosted the annual Chief Osley B. Saunooke Memorial Invitational wrestling tournament at the Charles George Memorial Arena on Saturday, Jan. 14.  The tournament, which drew 16 schools from three states, had been postponed from the week before due to inclement weather.

Anthony Toineeta, a senior who is the defending state champion, led the Braves with a win in the 160lb division.  He won all of his matches on the day by fall (pinning his opponent).  In the quarterfinals, Toineeta pinned Cody Long (Swain Co.), and he went on to pin Ben Pitrolo (Asheville) in the semifinals.  Then, in the finals, he pinned Connor Good (McDowell) to take the tournament championship – his second in a row.

CHAMP: Corbin Wildcatt (right), an EBCI tribal member at Swain Co., works against Mountain Heritage’s Sam Newman in the semifinals of the 285lb. division. Wildcatt ended up pinning Newman to advance to the finals where he pinned Pisgah’s Terren Brown for the championship.

The winners in each weight division are as follows: