Members of the Cherokee (Central Schools) Chamber Singers group had their dreams come true by being able to perform at Disneyworld in Orlando, Fla. recently.  Fourteen students and chaperones, including Michael Yannette, Cherokee High School and Middle School director of choir and musical theater, made the trip during the weekend of Jan. 13-15.

“Any quality program has to include amazing goals that kids get to go and do,” Yannette said of the first-year group, “and, this has really been our first opportunity to do something on a much bigger level than just Christmas caroling locally.  The dream was really just to get them out singing for the first time and give us a performance goal.”

To become eligible to perform, the group had to undergo an audition process.  “We sang a couple of songs, videoed it, and sent it down, and then they invited us to do a concert.”

The concert itself took place at the Waterside Stage at Disney Springs which is a dining, shopping, and entertainment area.  “It turned out to be an awesome venue,” Yannette related.  “There was a beautiful, covered stage right on the water at Disney Springs.  It was pretty cool.” 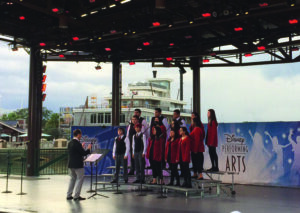 Eason Esquivel, a junior at Cherokee High School, commented, “The singing part was kind of nerve-wracking.  I was sort of terrified for it, but the whole experience can’t really be explained in words…it might sound cheesy, but it was magical.  Everybody seemed so happy.  People in the group that seemed sort of shy and shut-in seemed to come out and come alive.”

He said the entire trip was amazing.  “I got to connect with everybody on a personal level, and I feel very appreciative of Mr. Yannette.”

Cece Lambert, a freshman at Cherokee High School, said, “The trip overall was a huge success.  Whenever we got to the Waterside Stage, you could just feel the atmosphere, and the atmosphere altogether was just happy.  It was joyful.  Everybody was so nervous about messing up, but our performance was a complete success.”

She also noted that the trip made the group tighter.  “It brought us together as a family and closer as performers and made us better performers.  It was just an amazing experience.”

The group sang a total of seven songs during their performance including a barber-shop quarter song, “Lida Rose” from “The Music Man”, several pop songs, and a song from the musical “Hamilton”.

Yannette said their performance started in a light drizzle, but the crowd’s spirits weren’t dampened.  “When we started, there were 10-15 people watching us.  When I turned around, I noticed there were 25 people, and I’d turn around again and there were 30 people.  So, by the end there was like 50 people out there and they were incredibly supportive, cheering and just really into the concert.”

Jullian Rubio, a junior at Cherokee High School, agreed with his classmates.  “It was an awesome experience to be able to go down there and bond together and do a performance like this.  Everything was so happy and energetic the whole weekend.”

It was the first time many of the students had ever visited Disney, and while there, the group went to the Magic Kingdom, Animal Kingdom, and the Epcot Center.  They also took time to take in a production of the musical “Wicked” while in Orlando.

Yannette said the plan is to make a trip an annual event with the destination varying.  “Every year, we want to have a different goal that is set a little higher.  Next year, I would love for the kids to sing in Carnegie Hall in New York.  So, we’re going to work really hard this next year to get our excellence level up to that par.”

The trip itself was funded by various tribal offices and entities.  Yannette thanked Vice Chief Richard G. Sneed, Principal Chief Patrick Lambert, Tribal Council, Cherokee School Board and the staff at Cherokee Central Schools for their help and support.  “It was an amazing contribution rally from the community,” said Yannette.

Esquivel summed up the entire experience, “Dreams can come true.”