“Unto These Hills” going back to original script for 2017 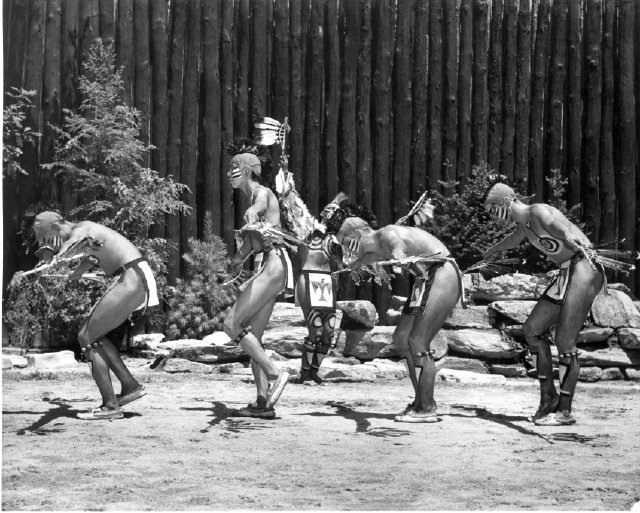 This historical photo, from the Museum of the Cherokee Indian archives, shows a dance during the inaugural 1950 season of “Unto These Hills”.

The outdoor drama, “Unto These Hills”, was first performed at the Mountainside Theater on July 1, 1950 from a script by Kermit Hunter.  The drama was re-written entirely in 2006, to mixed reactions, and now the Cherokee Historical Association (CHA) is going back to the original Hunter script, with some changes to account for historical inaccuracies and stereotypes, for the 2017 season.

“We’ve known since that 2006 show that we’ve wanted to do the original,” said John Tissue, CHA executive director.  “The original idea, in 2005, was to fix the Kermit (Hunter) script in a way so that it could be brought into modern sensibilities, and it got run away with an all new cast and crew and director, and it didn’t end up any way anybody wanted.  About two years ago, we started feeling it was about time to bring that script back because it had a lot of warmth and a lot of character, and we got a lot of people asking about it.”

The 2017 season will open with Merchant’s Night on Thursday, June 1 followed by Local’s Night on Friday, June 2 and Opening Night on Saturday, June 3.

Tissue credits Principal Chief Patrick Lambert with accelerating the process to bring back the original script.  “We’d always planned to go back, but he kind of accelerated that process for us, helped us find the money that we needed to do it, and we’re doing what should have been done back in 2005 and really do a masterful re-write of the original and atone for some of the inaccuracies and patronizing kind of language in the old drama.”

One major change from this version though is length.  The original show was three hours long, and this version will be one hour and forty-five minutes with a 15-minute intermission.

Philenia Walkingstick, CHA associate art director and EBCI tribal member who has been associated with the drama for over 30 years, will serve as the assistant director for the drama in 2017.  She related she’s happy with the script changes and is excited about the production.

Speaking of script changes, Walkingstick noted, “The third person is completely taken out…all the characters are well-fleshed out now.  You can actually understand and know who they are.  We have flipped some things such as everyone knows Junaluska from the old show being this great, powerful leader.  In historical reality, he was never a Chief so technically, at the Council, he wouldn’t have led that discussion, Yonaguska would have.  So, we changed those things to reflect who actually was in power at that time.  The story still revolves around Tsali and his family.” 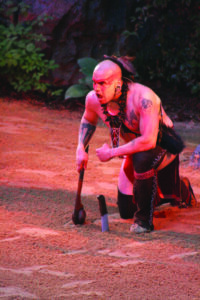 Mike Crowe Jr. performs the Cherokee Warrior Dance as part of the “Unto These Hills” outdoor drama on Local’s Night on May 31, 2012. (SCOTT MCKIE B.P./One Feather)

Mike Crowe Jr. and Matt Tooni, both EBCI tribal members and cast members, are looking forward to the 2017 production.

“I think it’s probably going to be, from my perspective, the most challenging season I’ve been involved with because of the expectation,” said Crowe who came to the drama after the 2006 re-write.  “I don’t want to let anybody down.  It’s a lot to live up to.  We’re definitely going to go all out for this one and try to do it right and respectfully.”

Tooni said that after attending a read-through of the script that will be used for the 2017 show, it took him back to 2003 when he worked in the show at that time.  “I’m looking forward to it because it’s going to be fun to go back to this script.  There were certain lines in it and certain characters in it that you just love to hear…Ms. Perkins is back in it again and who doesn’t remember Ms. Perkins from the old show?”

Lizzie Hull, an EBCI tribal elder, is a long-time member of the cast.  “I’m just glad it’s going back.  This will be my 45th season.  I’ve seen the different stages of it, how they’ve changed it, and I remember how it was before. I’m glad they’re putting some things back in there that I remember.”

Although not the reason for the return to the original show, Tissue said he thinks the venture will be profitable.  “I think that if it’s marketed right, it could really go somewhere, and I think a lot of that is us getting the word out about the original coming back.  But, that’s not really the impetus behind what we’re doing.  We’re wanting to do this to fulfill the promise we made in 2005 to fix the show in a proper way, and we’ve finally got the people and the resources to do it.”

The 2017 show will cost a little more than in previous years due to one-time expenses like purchasing new equipment to enhance the stage show, building new sets, and the addition of personnel.  “Typically, this show costs about $600,000 annually to run, maybe a little more,” said Tissue.  “This year, we’re probably going to put $1,000,000 in that show.  A lot of that is payroll because we’re going from a cast of 48-55 to close to 70.”

He further noted, “We wanted to upgrade the pageantry of the drama as well and make sure that we’re fitting those kinds of modern sensibilities.  We’re trying to add projections and new lighting, sound effects, and they’ll be some newly added elements to enhance the production value overall.”

Around $10,000 – $15,000 will be spent on costumes.  Martha Sampson, an EBCI tribal member, is the costume manager and related that she’s excited to see the show return to the original script.  She said some costumes have been saved, but some will have to be re-made.

Walkingstick added, “We’ve got to rebuild a lot of things for the show such as the church, the cottage on the side, and more.”

Tissue gives a special thanks to the Cherokee Preservation Foundation for helping the production by being flexible in their grant cycle which generally is in December with the grantees being paid in May.  But, that time frame was impossible for this year’s show which has expenses now.

“They gave us a discretionary amount of around $300,000 with the following $200,000 to come at the normal time to help with payroll to help us get the show up.”

Auditions for the 2017 production of “Unto These Hills” will be held on Saturday, Jan. 21 from 2-4pm at the Cherokee Historical Association building.  Those coming to audition can have a prepared monologue or do a cold read, and some parts will require a singing audition as well.