Russell Reed, a 7-year-old EBCI tribal member, walked into Cherokee Indian Hospital on Thursday, Dec. 8 with one goal: to deliver 24 Pediatric activity bags for any child that had or will be admitted into inpatient. With each item carefully chosen and packed by Russell himself he picked this as his service project for “Team Boogie Monster”, the team a representation of his nickname, because he knows firsthand how bored a kid can get when faced with a lengthy hospital stay. Since he was 5-years-old, Russell has been battling Juvenile Idiopathic Arthritis (JIA), a very real and often over-looked form of arthritis.

When most people think of the word arthritis, almost too often no one associates it with children. However, according to arthritis.org, “Juvenile arthritis affects nearly 300,000 children in the United States.” 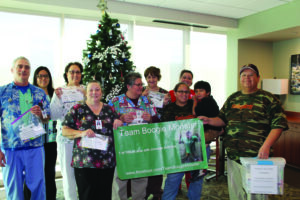 Although Juvenile Arthritis has many of the same symptoms of arthritis, there are variables that make it distinct in itself but still non curable such as eye inflammation, skin rash and high fever along with stiff joints in the morning that may cause limping.

“When I asked Russell what he wanted to do,” said LouAnn Shaw, Russell’s mother, “he said he wanted to make activity bags because ‘it sucks being in the hospital with nothing to do’.”

Russell has been through his fair share of hospital stays including frequent checkups to keep an eye on his high blood pressure and low kidney function.

“We went to an advocacy conference in Philadelphia back in August and that’s where we got to meet other parents who are experiencing the same things we are,” Shaw stated, “it was there that we learned that there were two other kids in western North Carolina that had Juvenile Arthritis like Russell.”

Team Boogie Monster has been present at various fundraisers for arthritis and other rheumatic diseases with the most recent participation on Dec. 4 in the Jingle Bell Run in Asheville and in the Cherokee Christmas Parade on Dec. 10.

If you would like to support Russell Reed and his “Team Boogie Monster”, you can visit their Facebook page at www.facebook.com/teamboogiemonster for more information.