BAKERSVILLE – The Cherokee Braves (9-5) ended their 2016 campaign with a third round playoff loss on a chilly night in Mitchell County.  The Mountaineer’s quarterback, Ben Young, had 375 yard of total offense, as Mitchell (13-1) topped the Braves 45-14 and advanced to the Regional Finals of the 1A state playoffs.

Damion Blanton and Byron Locust led Cherokee on the defensive side of the ball with 10 tackles each.  Tye Mintz had 7 tackles and one sack and Holden Straughan had 7 tackles.

The first quarter was even with both teams moving the ball some.  Mitchell got on the board first as Young ran 12 yards for the first score of the game.  Luis Velazquez added the extra point, and the Mountaineers led 7-0 just four minutes into the game. 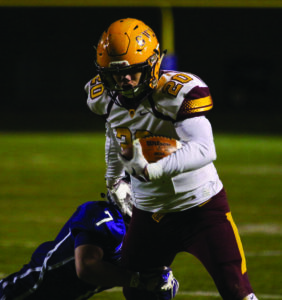 FIGHTING FOR YARDS: Holden Straughan (#20), Braves junior wide receiver, runs after catching a ball in the first half of a playoff game at Mitchell on Friday, Dec. 2. On the game, he caught six passes for 60 yards. (SCOTT MCKIE B.P./One Feather)

Cherokee evened the game up six minutes later as Evans completed a halfback pass to Cade Mintz for a 35-yard score.  Tino Pete added the extra point to tie the game at 7-7.

The first half of the second quarter was almost identical to the first quarter with both teams scoring right after the other.  Mitchell took the lead on a 80-yard pass play from Young to Brody Smith.  After Velazquez’s kick, the Mountaineers led 14-7.

Mitchell would go on to score two more times in the quarter though as Young connected with Smith on a 29-yard pass and then Young ran for a 26-yard score.  Velazquez added both extra points, and the Mountaineers took a 28-14 lead into the locker room.

The second half was all Mitchell as they scored three times.  Ben Robinson scored on a 3-yard run in the third quarter, Landon Miller scored on a 1-yard run midway through the fourth, and then Velazquez kicked a 23-yard field goal to round out the scoring at 45-14.

To view or purchase photos from this game, visit: https://onefeather.smugmug.com/SPORTS/FOOTBALL/BRAVES-FOOTBALL-2016/At-Mitchell-December-2/