Easement not granted for DAPL, new routes to be explored

In a move many throughout Indian Country are praising as a victory, the U.S. Army Corps of Engineers has refused to grant an easement in the Dakota Access Pipeline Project located very near the Standing Rock Sioux Reservation.  The proposed easement that was rejected would have had the pipeline crossing under Lake Oahe in North Dakota.

“Although we have had continuing discussion and exchanges of new information with the Standing Rock Sioux and Dakota Access, it’s clear that there’s more work to do,” Jo-Ellen Darcy, U.S. Army’s Assistant Secretary, said in a statement following the announcement of the easement refusal on Sunday, Dec. 4.  “The best way to complete that work responsibly and expeditiously is to explore alternate routes for the pipeline crossing.”

In her statement, Darcy expressed that an Environmental Impact Statement should be accomplished for the project.

Following the U.S. Army’s announcement, Standing Rock Sioux Tribal Chairman Dave Archambault II commented, “We wholeheartedly support the decision of the administration and commend with the utmost gratitude the courage it took on the part of President Obama, the Army Corps, the Department of Justice and the Department of the Interior to take steps to correct the course of history and to do the right thing.  The Standing Rock Sioux Tribe and all of Indian Country will be forever grateful to the Obama Administration for this history decision.” 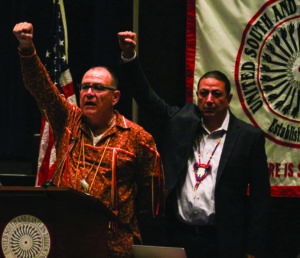 SOLIDARITY: Brian Patterson (left), USET president, and David Archambault II, Standing Rock Sioux Tribe (SRST) chairman, stand with their fists raised at the opening ceremonies of the USET Annual Meeting, held in Cherokee in October, in a show of solidarity for the SRST’s fight against the Dakota Access Pipeline. (SCOTT MCKIE B.P./One Feather)

He went on to say, “We want to thank everyone who played a role in advocating for this cause.  We thanks the tribal youth who initiated this movement.  We thank the millions of people around the globe who expressed support for our cause.  We thank the thousands of people who came to the camps to support us, and the tens of thousands who donated time, talent, and money to our efforts to stand against this pipeline in the name of protecting our water.  We especially thank all of the other tribal nations and jurisdictions who stood in solidarity with us, and we stand ready to stand with you if and when your people are in need.”

Energy Transfer Partners, L.P. and Sunoco Logistics Partners L.P., the companies running the Dakota Access Pipeline, released a statement on Sunday night, “For more than three years now, Dakota Access Pipeline has done nothing by play by the rules.  The Army Corps of Engineers agrees, and has said so publicly and in federal court rulings.  The Corps’ review process and its decisions have been ratified by two federal courts.”

They called the announcement by the U.S. Army a “political decision” and stated, “In spite of consistently stating at every turn that the permit for the crossing of the Missouri River at Lake Oahe granted in July 2016 comported with all legal requirements, including the use of an environmental assessment, rather than an environmental impact statement, the Army Corps now seeks to engage in additional review and analysis of alternative locations for the pipeline.  The White House’s directive today to the Corps for further delay is just the latest in a series of overt and transparent political actions by an administration which has abandoned the rule of law in favor of currying favor with a narrow and extreme political constituency.”

The Eastern Band of Cherokee Indians has supported the efforts of the Standing Rock Sioux since the pipeline issue started, and the Tribe approved a $50,000 donation in September to aid the Standing Rock Sioux in their legal battles over the pipeline.  Principal Chief Patrick Lambert released a statement on Sunday night following the Army’s announcement, “This is a huge victory for Native Tribes across the country and is something I am very proud of our Tribe for having been in support of since the beginning of their protest. The EBCI stood in support financially and has supported several groups to attend the front lines beside our native brothers and sisters.”

Chief Lambert went on to state, “President Obama has led the charge to assist with the halt to the project, and is making right the concerns of safety by the Standing Rock Sioux people, and many others from all over the country.  Chairman Archambault has stood his ground for his people, in the midst of one of the largest protests in recent history on Indian grounds, and has gained the highest respect from all of us. I am happy that his people, and the thousands of others who have dedicated themselves to this cause, can find peace in their efforts to protect their sacred waters.”

The Standing Rock Sioux were also supported by the member tribes and nations that comprise USET (United South and Eastern Tribes).  Chairman Archambault addressed the USET Annual Meeting, held in Cherokee in October, and stated then what their fight was truly about, “The movement is about the Missouri River.  That’s where we live.  That’s our home.  The Missouri River is water, and to us, water is life.  All we have to try to do is go without it for several days and we understand what it means.  It’s really easy and a real simple concept – let’s protect our water.”

Information from the Army describes the pipeline, “The Dakota Access Pipeline is an approximately 1,172 mile pipeline that would connect the Bakken and Three Forks oil production areas in North Dakota to an existing crude oil terminal near Pakota, Illinois.  The pipeline is 30 inches in diameter and is projected to transport approximately 470,000 barrels of oil per day, with a capacity as high as 570,000 barrels.”