The appointment, announced by WCU Provost Alison Morrison-Shetlar, is effective Wednesday, Dec. 1. Sampson fills a vacancy created by the Sept. 30 retirement of Roseanna Belt, who had served as director of the Cherokee Center since 2001. The center is located at 1594 Acquoni Road in Cherokee.

“Sky Sampson has a passion for connecting the youth of the Eastern Band of Cherokee Indians with opportunities for further education,” Morrison-Shetlar said.  “She has a proven track record of providing pathways for success through her work with students and families on the Qualla Boundary and with faculty and staff at WCU, as well as at Southwestern Community College.  Sky has exhibited strong leadership in her experiences both on the Qualla Boundary and at the university.  I am very excited to work closely with her to ensure that Western Carolina University continues to meet the educational needs of the people of Cherokee and all the communities our institution was founded to serve.” 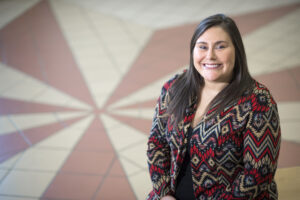 Sampson, an EBCI tribal member, earned her bachelor’s degree in communication with a concentration in public relations at WCU in 2010 before going on to receive her master’s degree in human environmental sciences at the University of Alabama in 2014.

She has served as program manager for the Cherokee Youth Council of the Cherokee Boys Club since May 2011, leading efforts to help young people of the Eastern Band develop leadership skills. During her time as a student at WCU, she coordinated special events and advised student organizations through the Department of Intercultural Affairs and worked as an intern in the Office of Public Relations.

“It is such an honor to be selected to represent both the Eastern Band of Cherokee Indians and Western Carolina University in what will be an engaging partnership for the future, and I look forward to working within the communities on the Qualla Boundary and on the WCU campus,” Sampson said.

“As a WCU alumna and as a representative of a close partnering entity of the tribal system, I have firsthand knowledge of the importance of the Cherokee Center within our community and on and off the WCU campus,” she said. “I welcome this opportunity to create new relationships, rekindle past partnerships and open new doors for the future of our Eastern Band of Cherokee Indians students.”

As director of the Cherokee Center, Sampson will serve as a liaison between WCU and the communities and schools in Cherokee and the surrounding area. She will have primary responsibility for implementing the Cherokee Center’s Strategic Plan, which was developed jointly with community members from the Eastern Band and WCU.

Sampson will focus on recurring themes of recruitment and mentorship of EBCI members enrolled or desiring to enroll at WCU. In her role, she will work closely with all departments on campus, especially Cherokee Studies, Health Sciences, Grants and Contracts, Admission, Student Affairs and Educational Outreach.

Established in 1975 as an office for outreach and partnership development, the Cherokee Center is committed to serving tribal and non-tribal residents of Qualla Boundary and the surrounding communities by improving educational opportunities.

“I would be remiss if I did not take this opportunity to once again thank Roseanna Belt for her many years of service and leadership at the Cherokee Center,” Morrison-Shetlar said. “Roseanna has been a valuable ally in maintaining a strong and mutually productive partnership between the university and the Eastern Band of Cherokee Indians.”