In an effort to increase interest in reading by Eastern Band of Cherokee Indians students, Tribal Council has passed legislation funding a local program of the Dolly Parton Imagination Library.  The legislation, submitted by Vice Chief Richard G. Sneed, was passed unanimously during a Budget Council session on Tuesday, Nov. 29.

The non-profit program mails free books to children each month with the mailing costs of the books being picked up by a partner organization – in this case, the Eastern Band of Cherokee Indians.  Tribal Council approved a total of $52,000 for a five-year span of the program for the Tribe.

“There are countless studies to document and support the fact that reading aloud to your child has benefits, not only with brain development and their academic and social development, but it’s an opportunity for us to sow some seeds for our youngest, most vulnerable, and most important asset,” Vice Chief Sneed said during Tuesday’s Budget Council session.  “Scientifically, we know that children that are read to are more prepared when they arrive at Kindergarten to learn to read.  We know that reading aloud to your child stimulates early brain development.  We know that it helps build language and literacy and social skills.” 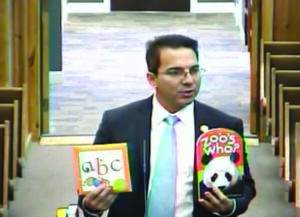 READING: Vice Chief Richard G. Sneed tells about the benefits of reading to children as he discusses the Dolly Parton Imagination Library Program during a Budget Council session on Tuesday, Nov. 29. Legislation he submitted was passed unanimously, and the program will soon be available to EBCI children ages 0-5. (EBCI Livestream screenshot)

He said that only one in three children start Kindergarten with the skills they need to learn to read and that two-thirds of children “can’t read proficiently” by the time they leave the third grade.

“The Dolly Parton Imagination Library actually pays for the books and then the partner organization pays for the shipping,” Vice Chief Sneed related.  “The cost is $2.10 per book, and they get one book per month for every applicant that signs up.”

He said the service area for the Tribe is currently 1,354 children between the ages of 0-5.  “By the Imagination Library’s numbers, 60 percent of the eligible children in a service area will sign up for the program.”

According to the Imagination Library website, there are a total of 992,753 children in the United States, Canada, the United Kingdom, and Australia enrolled in the program as of Friday, Dec. 2.

Yellowhill Rep. Anita Lossiah thanked Vice Chief Sneed for bringing the initiative forward.  “It is vital that all of us, as parents, understand the importance of reading to our children at an extremely young age.  It is very important for their development.”

Vice Chairman Brandon Jones said his children are already signed up for the program.  “They love the books.  They’re excellent quality, and they come in the mail shrink-wrapped so it’s like Christmas once a month when they get them.  In looking at the way society has trended and moved towards devices, it makes me want to pull my hair out at home…we’ve been reading with our kids for awhile now, and you can see the difference.”

He added, “I think it’s really important, as a parent, to take that time with your children.”

During discussion on the legislation, an amendment was made to break the $52,000 into five parts that would be estimated costs per year for the next five budget cycles for the Tribe.  The breakdown will be as follows:

The legislation itself states, “…the more types of reading materials there are in the home, the higher students are in reading proficiency, according to the Educational Testing Service.  The Education Testing Service reported that students who do more reading at home are better readers and have higher math scores…”