GATLINBURG, Tenn. – There are now a total of 11 confirmed fatalities and 80 injuries along with 700 confirmed structures (300 in Gatlinburg and 400 in other parts of Sevier County) lost to the Chimney Tops 2 Fire.  The fire was first reported in Great Smoky Mountains National Park near Gatlinburg on Wednesday, Nov. 23 at approximately 5:20pm.

As of Friday, Dec. 2, the fire was 10 percent contained and includes a total of 17,859 acres – up from 15,653 acres the day before.  More firefighting personnel were added as of Friday to include a total of 17 crews, 31 engines, six helicopters, five dozers, and 458 personnel. 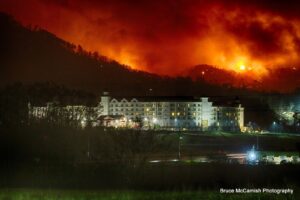 DEVASTATING: A total of seven confirmed fatalities were reported along with 700 confirmed structures (300 in Gatlinburg and 400 in other parts of Sevier County) lost to the Chimney Tops 2 Fire. (Photo by Bruce McCamish Photography, per Chimney Tops 2 Fire Facebook page)

“This is such a tragedy,” said Mike Dueitt, Incident Commander for the Southern Area Red Team.  “It is difficult seeing others suffer.  It will take time for this community to heal.”

National Park Service officials related, “Chimney Tops 2 Fire is currently burning in brush, hardwood slash, and leaf litter. Fire crews are still mitigating hazards and securing the fire perimeter while determining what additional actions are needed to prevent any additional spread of fire. The priority is: 1) public and responder safety 2) structure protection and 3) limiting the fire spread. Fire crews and Tennessee Department of Transportation crews will be working on U.S. 441, locally known as The Spur, to keep it open for emergency traffic. The Tennessee Division of Forestry is integral in assisting our crews in forested areas outside of the park. Aircraft will be overhead today to assist with suppression efforts.”

Officials added, “Today is a significant day with renters, lease holders, homeowners, and business owners being allowed to access their property. They will be able to go in between 10am – 5pm today through Tuesday, Dec. 6.”

The Great Smoky Mountains National Park is closed from the Gatlinburg Entrance to Smokemont near Oconaluftee and Little River Road from Sugarlands Visitor Center to Medcalf Bottoms.  The Gatlinburg Bypass is also closed.  The Spur, which runs between Pigeon Forge to Gatlinburg, is open only from Pigeon Forge to the Gatlinburg Welcome Center.  There will be no access to Wiley Oakley Beech Branch or Westgate from the Spur.