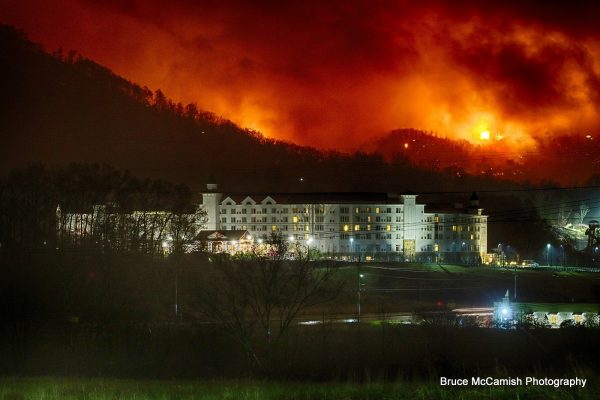 DEVASTATING: A total of seven confirmed fatalities were reported along with 700 confirmed structures (300 in Gatlinburg and 400 in other parts of Sevier County) lost to the Chimney Tops 2 Fire. (Photo by Bruce McCamish Photography, per Chimney Tops 2 Fire Facebook page)

GATLINBURG, Tenn. – A total of seven confirmed fatalities were reported along with 700 confirmed structures (300 in Gatlinburg and 400 in other parts of Sevier County) lost to the Chimney Tops 2 Fire.  The fire was first reported in Great Smoky Mountains National Park near Gatlinburg on Wednesday, Nov. 23 at approximately 5:20pm.

As of Thursday, Dec. 1, the fire was 10 percent contained and includes a total of 15,653 acres.  A total of nine crews, 22 engines, seven helicopters, four dozers, and 285 total personnel were in action on Thursday.

From the Fire Behavior Analyst, “The area around the Chimney 2 Fire received rainfall today ranging from 1.2 to 1.7 as of 3:30pm. The same area has been experiencing drought that has persisted over the past four months. Knoxville has received only 2.24” of rain over past 100 days, 13.48 is normal for same period. The rainfall received today will only last for 1 to 2 days due to prolong drought. Fire activity will increase until significant rainfall is received over several days. Indices used to predict fire danger were at or approaching all-time highs before the rainfall. These indices will start to move back towards the same level as before the fire over next couple days if no rainfall is received”.  This means the rain we received may have slowed this fire for a day or two at a critical time, but the threat from this fire is still there.

A mandatory evacuation is still in effect for most of Gatlinburg as of Thursday morning.