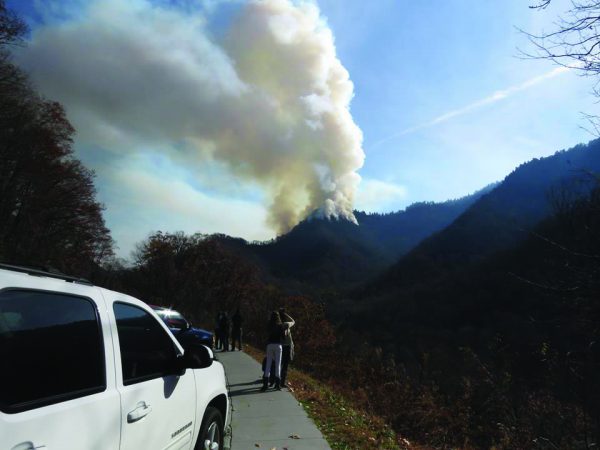 STARTED SMALL: A fire, being called the Chimney 2 Fire, in the Great Smoky Mountains National Park is seen in this photo taken from Newfound Gap Road on Friday, Nov. 25. (NPS photos)

Great Smoky Mountains National Park received notice of a fire 150 yards behind the Twin Creek Picnic Pavilion off Cherokee Orchard Road at around 11:35am on Monday, Nov. 28.  National Park Service firefighters and the Gatlinburg Fire Department have responded to the area. The Tennessee Division of Forestry also responded to the area to stage equipment for use as needed. All non-fire park service personnel were evacuated from the nearby Twin Creeks Science Center as a precaution.

As of Monday afternoon, it is unknown if the fire near Twin Creeks is a spot fire associated with the Chimney 2 Fire or if it is an independent ignition.

Park officials related, “Due to continued erratic winds, the fires are very unpredictable and more fire growth is expected. State and local fire departments have been alerted to respond as needed to potential threats to private properties along the Park boundaries including Gatlinburg and Pittman Center.”

As of Monday, the Twin Creek fire posed no immediate threat to structures at LeConte Lodge or any areas outside of Park boundaries including Gatlinburg, Pittman Center, or Cosby facilities. 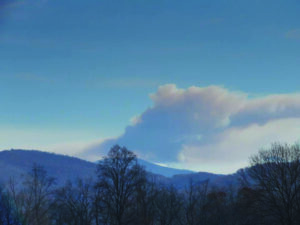 AND, GREW…: The fire, which had burned three acres on Friday, grew to over 500 acres by Monday afternoon.

Park officials were forced to close Newfound Gap Road, Cherokee Orchard Road, Elkmont Road, and several trails on Monday morning due to the Chimney 2 Fire.  “The fire has grown to approximately 500 acres in size overnight due to extreme, sustained winds over 20 mph,” said Park officials in a statement.  “National Park Service fire crews are focusing on suppression efforts to ensure public safety and protect park facilities at locations such as Chimneys Picnic Area. The fire is currently moving northeast, burning primarily along the ground layer through duff and leaf litter. Gusting winds have caused the fire to spot across the ridges in the Chimney Tops and Bullhead Ridge areas.”

On Sunday, Nov. 27, three helicopters dropped water throughout the area to help suppress the fire over the extremely steep, rough terrain. Additional ground firefighters were also requested to help with suppression efforts in anticipation of predicted winds for Monday afternoon.

Due to the smoke, Park officials issued an air quality advisory on Monday afternoon which stated, “The air quality today is unhealthy for the Sevier County section of the park and adjacent areas, especially in the Gatlinburg area due to heavy smoke from the nearby Chimney 2 Fire.   Concentrations of particulate matter from smoke along with the strong winds from the south has exceeded the human health standard and is expected to remain at these levels today for park visitors and staff.  Active children and adults, and people with respiratory and pulmonary disease are at risk.  People should refrain from strenuous or prolonged physical outdoor activities and limit exposure.”

The cause of the fire near Chimney Tops appears to be human caused and is under investigation.  If anyone has information regarding the origin of this fire, or other fires in the park, please call the park’s Tip Line (865) 436-1580.