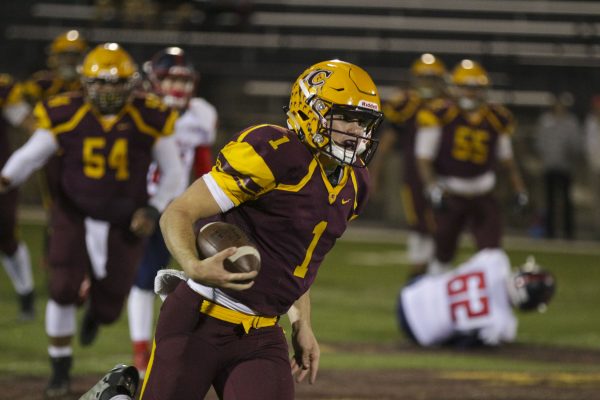 BIG RUN: Tye Mintz (#1), Braves junior quarterback, runs up the middle enroute to 63-yard touchdown run in the third quarter. On the night, Mintz completed 4 of 8 passes for 83 yards and two touchdowns, and he ran 17 times for 213 yards and three scores. (SCOTT MCKIE B.P./One Feather photos)

Cherokee (8-4) got its first playoff win since 2008 with a big home win on Friday, Nov. 18. Tye Mintz, Braves junior quarterback, accounted for five touchdowns for the second game in a row to help lead the Braves over the Union Academy (4-8) Cardinals 51-34.

Union Academy was led by Manasseh Missick who completed 6 of 9 passes for 41 yards and a touchdown.  He rushed 18 times for 145 yards and four touchdowns.

The Cardinals took the opening kickoff and drove down the field for the first score as their quarterback, Missick, ran it in from one yard out to make it 7-0 five minutes into the game. Four minutes later, Cherokee answered as Mintz ran 10 yards for his first score of the game. Tino Pete added the extra point to make it 7-7 at the 2:49 mark of the first. 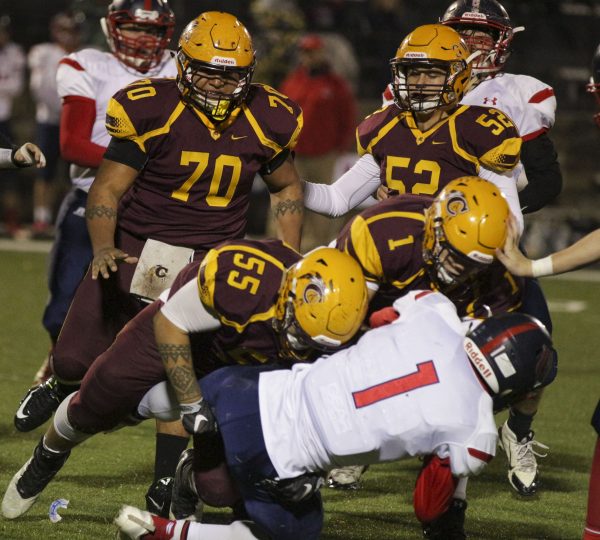 Union Academy started their next drive deep in their own territory and Missick would add his second touchdown of the game on a 71-yard run with 2.1 seconds left in the quarter. The Cardinals led 14-7 at the end of the first. Several possessions later, Mintz connected with Holden Straughan, junior wide receiver, on a 10-yard touchdown pass. Pete added the extra point to tie it up at 14-14 with 2:30 left in the half.

The last 24 seconds of the half were very exciting.

Missick added his third rushing touchdown of the game on a 19-yard run. The Braves blocked the extra point and the Cardinals led 20-14 with 24.3 seconds left before halftime. 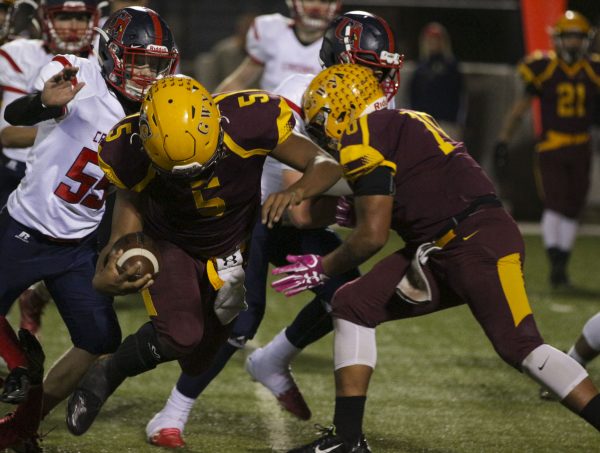 Cherokee got the ball back, and several plays later Mintz threw a 51-yard bomb into the end zone that was tipped by a Cardinals player into the hands of an alert Blake Smith, sophomore wide receiver, as time expired. Cherokee added a two-point conversion to lead 22-20 at the half.

A few minutes into the third, Evans would score his first of the game on a 1-yard run. The point after failed and Cherokee led 28-20 at the 9:37 mark. Three minutes later, Missick got into the end zone again as he ran in from 15 yards out. The two-point try was good and the game was tied at 28-28 midway through the quarter.

The Braves would take control for the rest of the quarter, scoring twice. Evans scored his second of the game on a 10-yard run followed two minutes later by a 63-yard touchdown run up the middle by Mintz. Cherokee led 43-28 at the end of the third.

The Cardinals scored early in the fourth as Missick connected with Josh Bitgood on a 2-yard touchdown pass. The point after failed and Cherokee led 43-34.

The Braves would put the icing on the cake as Mintz scored on a 5-yard run with just over two minutes left. The two-point conversion was good, making the final 51-34.

With the win, Cherokee advances to the second round of the 1A State Playoffs. They travel to #1 seeded North Duplin on Friday, Nov. 25 at 7:30pm.

To view or purchase photos from this game, visit: https://onefeather.smugmug.com/SPORTS/FOOTBALL/BRAVES-FOOTBALL-2016/Vs-Union-Academy-November-18/