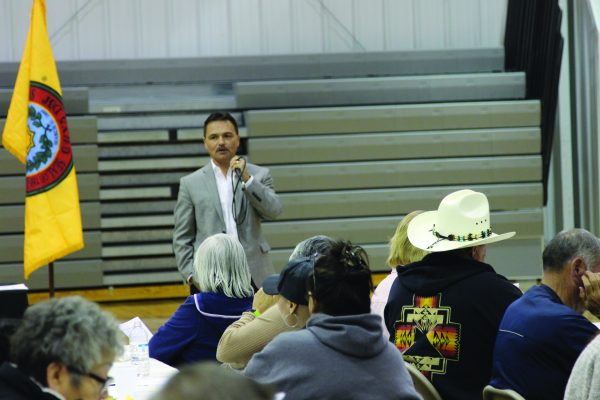 Principal Chief Patrick Lambert held a town hall meeting at the Birdtown Gymnasium on the evening of Thursday, Nov. 10. The meeting began at approximately 5:30pm with a crowd of between 200 and 250 people present. The audience consisted of community members, tribal employees, EBCI Secretaries and Directors and at least one Tribal Council representative. Dinner was provided and once everyone got seated, Chief Lambert moderated discussion, inviting people to ask questions. One of the issues that Chief Lambert addressed was the United States Department of Justice (DOJ) investigation that began approximately a month ago with a letter to the Qualla Housing Authority (QHA) to have available all documents of the Authority for possible review by the DOJ at a later date. The letter further admonished QHA to not destroy or remove any items from the offices under federal order.

Chief Lambert indicated that the DOJ had somehow gotten a tip that documents were being removed from the QHA at some time after the DOJ letter had been issued. He said, “Some reports were given to the FBI that the order of preserving and protecting the documents was ignored and they were actually shredding documents”.

He said that on Friday, Nov. 4, federal agents came in and seized the DVR equipment containing the video of incident. He said that the reason he was addressing this at the town hall is because, in his words, “The rumors are flying and I want you to hear it straight from me”.

He also said that he could only give information that is generally or commonly known due to the ongoing nature of the investigation. Referring to a campaign promise made at his inauguration, Chief Lambert said that he began his review of suspected improprieties by locating a company that specializes in forensic audits and hiring them to conduct sweeping audits on tribal government. He also said that as the audits were concluded, the results were immediately turned over to the Federal Bureau of Investigation. He indicated that this investigation must have “stepped on some toes” because that is when rumors of his impeachment surfaced. He said that he welcomed anybody to look at anything he has done morally, ethically or legally; because any negative acts implied by anyone are “flat wrong”. He stated that he would continue to clean the tribe up, even if it cost him re-election. 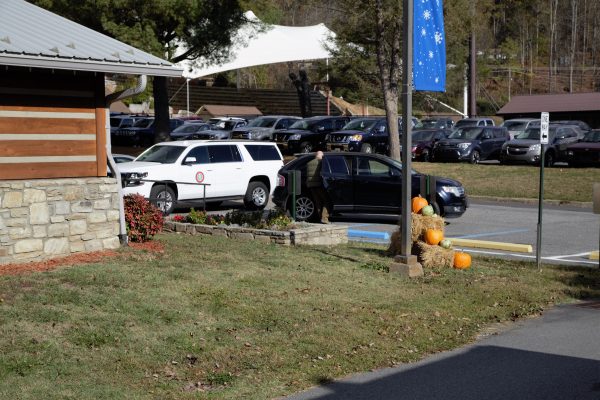 DOCUMENTS: Federal officials are shown loading documents from the Tribal Operations Program (TOP) Office into a vehicle on Wednesday, Nov. 9.

Chief Lambert touched on allegations that he inappropriately hired or dismissed tribal employees. He stated that he had not done anything that previous administrations had done with regard to personnel. He said that he has not broken any law. He referred to alleged subpoenas issued through a letter from members of Tribal Council. He stated that the letter and the subpoenas were issued outside of a Tribal Council session.

During a recent work session, there was some discussion of a letter authorizing the Tribe’s Internal Audit Division to pursue an investigation of the hiring practices of the current administration and, allegedly, subpoenas were issued based on the letter. During that work session, some Tribal Council representatives indicated that they had not seen the letter and did not know any subpoenas had been issued. These representatives included Painttown Rep. Tommye Saunooke and Big Cove Representatives Richard French and Teresa McCoy.

Chief Lambert also related that his son’s education records had been subpoenaed from the Education & Training Division of the Tribe.

Rep. French, during a recent work session and in agreement with Chief Lambert, stated that his daughter’s records had also been seized via subpoena.

Subpoena authority is given to Tribal Council under Cherokee Code, Section 117-17, which states, “The Tribal Council and its duly authorized committees shall be authorized to investigate the affairs of the Tribe. In carrying out such investigations, the Council or its committees subpoena witnesses, administer oaths, and compel the production of evidence”.

The scope of the investigation of the Tribal Council has not been clearly defined and the public has not been supplied a copy of the letter currently being acted on by the Office of Internal Audit. Chief Lambert questioned whether or not the Council acted appropriately in issuing the letter outside of a convened Council session and what relevance his son’s education records would have in a human resources investigation.

Yellowhill Rep. Anita Lossiah spoke to the authority of the Council to initiate investigations during the town hall. She also stated that, hopefully, the investigation initiated by the Council would soon wrap up and that she is “ready for it to wrap up”.

Most significant during the meeting was the presentation of a draft constitution for the Eastern Band of Cherokee Indians. Chief Lambert referred to the document as a starting point for community discussion and input. This is the first presentation of a constitution since Chief Lambert asked for and received authorization from Tribal Council in October of 2015 to craft a draft constitution for EBCI. The document included an outline for three branches of government to include a judicial branch. He stated that he has always supported the concept of having a judicial branch. A copy of the 16-page document is available online at theonefeather.com or at the social media site, Facebook (Cherokee One Feather).

Several audience members spoke in support of expanding the Cherokee language academy up to the 12th grade level. Those who spoke in favor of it stated that learning to speak the language had value beyond maintaining the language. They said that students who learned the language had more respect for the Cherokee culture, history and other people. They indicated that children in the program had more respect for each other, their communities and families. Someone suggested that being involved in the language and culture was a good drug abuse deterrent. They asked Chief Lambert for support of expanding the academy. Chief Lambert indicated that was in line with his plans to increase education.