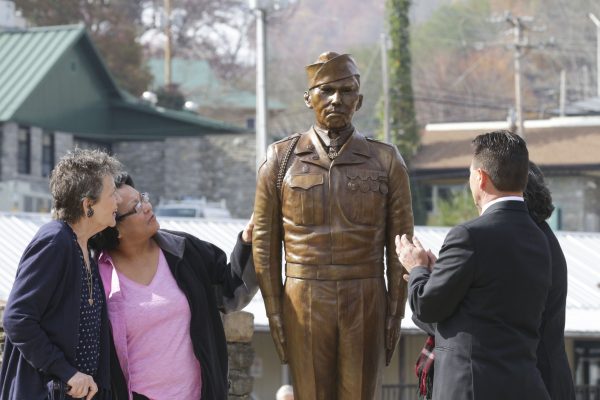 An amazing Cherokee hero will be forever remembered and honored as his likeness stands watch over the refurbished Cherokee Veterans Park.  A bronze statue of PFC Charles George, Medal of Honor recipient, was unveiled during a ceremony at the Park on Veteran’s Day, Friday, Nov. 11.

The statue is identical to one placed a month ago at the Charles George VA Medical Center in Asheville.  Both statues were made by the late James Spratt, a U.S. Navy veteran who passed away on the same day the statue was unveiled in Asheville.

“This is an historic day for all of us as a Tribe,” said Principal Chief Patrick Lambert, a U.S. Army veteran.  “We honor, with highest regard, the men and women of this country and our Cherokee members who have served and defended our land.”

Chief Lambert thanked EBCI Facilities Management and Cherokee Tribal Construction for their work in refurbishing the Veterans Memorial Park.  “Whenever I took office, just over a year ago now, this monument behind us was overgrown with weeds and you couldn’t see the names on the monument.  It was just in bad need of repair.”

On military service, Chief Lambert related, “We share a common thread, and we have done it for nothing more than to give our skills and services to those around us.” 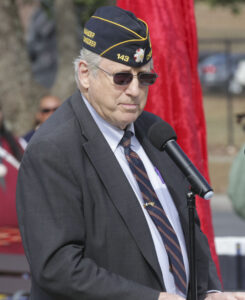 He spoke to the history of service of the Eastern Band of Cherokee Indians.  “Cherokee veterans have routinely signed up and went to the call of service.”

Chief Lambert added, “Standing out in front of this Park will be Private First Class Charles George, a Cherokee soldier who made the ultimate sacrifice for this country by diving on top of a grenade to save his comrades on the mission that he was on.  Charles George, like many others, whose names appear on these walls represent everything that we should stand for in life, defenders of freedom, soldiers who stand up to the tyranny of oppression and who will sacrifice their own lives if that is what it demands.”

Vice Chief Richard G. Sneed, a Marine Corps veteran, commented, “All who agree to serve, serve with the knowledge that they may be called upon to fight and to sacrifice their lives.  There’s nothing glamorous about war.  We pray for peace, but we stand ready always to defend our nation against all enemies foreign and domestic.”

Commander Lew Harding, Steve Youngdeer American Legion Post 143, said, “Throughout history, our American soldiers have endured unspeakable hardships, battles in foreign lands, so that their families might enjoy a future of freedom.”

He went on to say, “Freedom rings in America today because of the sacrifices of common Americans with great courage, bravery, and resolve.  Charles George, the brother that we honor here today, is one of those.  There are also many of those here standing and sitting with us.  I can look out in the audience and see so many.”

Commander Harding said it was a day of reflection as PFC George was honored.  “It’s a day to remember the white crosses in the military cemeteries all over the world – standing above ones who could not be here today.”

Warren Dupree, a member of Post 143 as well as the Charles George Memorial Project Committee, noted that the statue of PFC George is facing east.  “Native Americans, our belief is that the as the sun rises in the east, it chases away the darkness…it is the giver of life.  And, as the sun rises above the horizon, it’s warm fingers, it’s warm love reaches out and embraces all of us.”

After the unveiling of the statue, lunch was served in the Cherokee Indian Fairgrounds Exhibit Hall after which several awards were handed out.

There were dual Legionnaire of the Year Awards given including David McQueen, Post 143 Sergeant at Arms, and Clyde Harrison, a Vietnam Veteran and Silver Star recipient.

Pat Crowley, of the United States Brotherhood of Tankers Association, was on hand to honor Frank Taylor, a Korean War veteran, with a lifetime membership to the organization.

David Dorando, Ph.D., was honored for providing information vital to the creation of the military history museum at Post 143 headquarters.

David Boyd, a 14-year-old Life Scout from Thomasville who is working on his Eagle Scout Service Project, was presented a flag of the Eastern Band of Cherokee Indians by Dupree.  The flag will be included in the North Carolina Memorial Day Parade in May 2017.

“Little Charlie” statues, miniature versions of the original PFC George statue, were presented to various people who helped with the project including: Chief Lambert, Vice Chief Sneed, Renissa Walker of the Kituwah Preservation and Education Program, and Frank Cucumber of the VFW Post 8013.  A fifth statue will be presented to Tribal Council, at a later date, as no one was present to accept.

David Ledford was presented a “Quilt of Valor” for his service.

To view or purchase photos from this event, visit: https://onefeather.smugmug.com/COMMUNITY-and-NEWS-EVENTS/2016-Community-and-News-Events/Veterans-Day-Ceremony-November/ 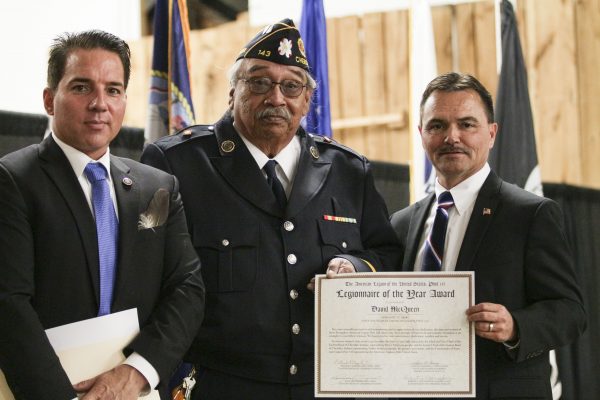 AWARD: David McQueen (center), shown with Vice Chief Sneed (left) and Chief Lambert, was one of two to be honored with the Legionnaire of the Year Award. 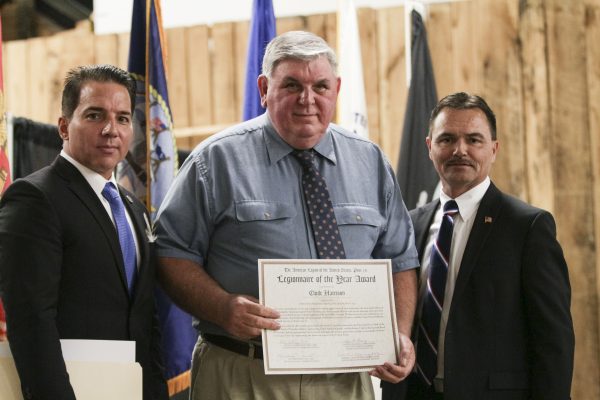