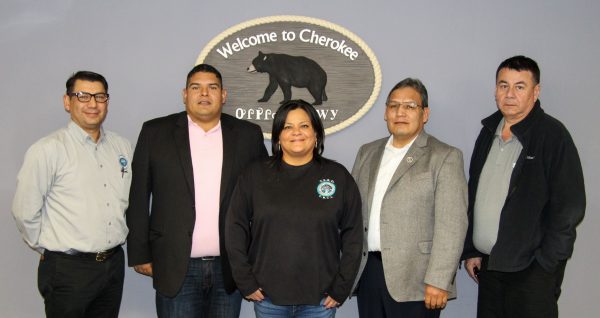 Lee A. Adolph has been involved with tribal employment rights and TERO (Tribal Employment Rights Office) law for almost three decades.  The current president and chief executive officer of CTER (Council for Tribal Employment Rights), an organization serving over 300 federally recognized tribes, Adolph brought that expertise to the Eastern Band of Cherokee Indians this week.

“I came in to help them do a cursory review of the (TERO) ordinance, and go over some amendments that I’d recommend,” said Adolph.  “The ordinance is kind of outdated.”

He gave recommendations on various topics including conducting TERO Commission hearings, staff development, and he gave information on the Workforce Protection Act.  “That law and order code would help the non-Indian workforce that tribes employ…a lot of tribes have done that because they don’t want the EEOC (Equal Employment Opportunity Commission) to come in and claim jurisdiction on them.  So, the tribes need to do that themselves internally.”

Adolph said, “Our main goal at CTER is to help tribes maintain their sovereignty at all costs…the Workplace Protection Act will do that for this tribe as it’s done for a lot of tribes already throughout Indian Country.  The most important resource of any tribe in Indian Country is its people, and that’s why TERO came about – to help develop that opportunity.”

Mara Nelson, EBCI TERO manager, said she greatly appreciates Adolph’s assistance.  “It’s been a sad awakening that we were very far behind other TEROs across the country.  It’s just made us realize what all we haven’t done in the past and what we need to do in the future to strengthen the program for our enrolled members and protect our businesses.”

She said Adolph is going to help their office look at the ordinance and policies and procedures, and they are hoping to contract him to help them update everything.

Nelson echoed Adolph’s sentiment that the EBCI should implement the Workforce Protection Act.  “If we’re allowing the casino to interfere with the personnel rights of non-Indians and the casino is not doing anything about it and we’re not allowing the EEOC in to protect them, we need to do something about those rights.”

She continued, “Protecting our sovereign immunity is always so important, and that’s one area that he’s going to help us with.”

Nelson said they are hoping to present some ordinance amendments within the next month or two.

Kevin Jackson, TERO Commission chairman, praised Adolph and his willingness to help the Tribe, “He’s very sound in the law and being able to fine-tune it.  Him coming here will help us strengthen our law. We’re looking for him to identify inconsistencies, strengthen our compliance law, make suggestions in how we should go about the law and order piece – just making it enforceable.”

He added, “There’s no reason why our community members cannot be employed and self-sufficient.  We need to provide that opportunity, and that training and education, so that they can be successful.”

Adolph and Jackson both said that TERO can be used to help with drug and alcohol recovery throughout Indian Country.

He said programs like that are so important within tribes.  “When non-Indians get terminated, they just leave.  They have no ties here.  For Natives, their ties are here because they got people that have been here for thousands of years.  Their people are buried here.  Where else are they going to go?  This is their homeland.”

Jackson said the TERO program is about community and the success of the community members.  They are looking to form partnerships with various agencies near Cherokee and throughout western North Carolina including the Oconaluftee Job Corps, Southwestern Community College, the EBCI Tribal WIA Program, the Jesse Owle Dugan Native Plant & Greenhouse Facility, and others.

He said one of the main goals behind the partnerships will be the opportunity for people to become certified in various jobs.  “We’re looking at certification, not just employment.  You have to have the certification to along with it.  We want people to be prepared for success.”

Jackson said their proposed partnership with the greenhouse will be part of their recovery efforts.  “What better way to build a support chain than putting them out their working in nature.  They’re watering that seed and watching it grow as they’re growing.”

He added, “As we come together as one unit, we can be very successful.  People can overcome their addictions.  They can be successful in recovery, and I think that greenhouse project that we want to propose is something that is very important to the success of these individuals because they’re caring for something.  Even though it’s a plant, they’re taking the time to nurture it.”

Jackson said the road ahead for TERO is bright, but relates it’s not going to be an easy journey.  “We’ve been faced with a lot of tough challenges, tough decision-making, but we swore as oath to uphold the law and to apply that law and that’s what we’re doing.  It’s hard.  You’re not going to be getting a lot of ‘thank yous’ when you’re enforcing a law and policy and procedure on the organization you work for.”

In the end, he said, “We’re not in it for ourselves.  We’re in it for those children…if we do not fix it today, then seven generations behind us will have to fix it…we don’t provide answers, we provide hope.”