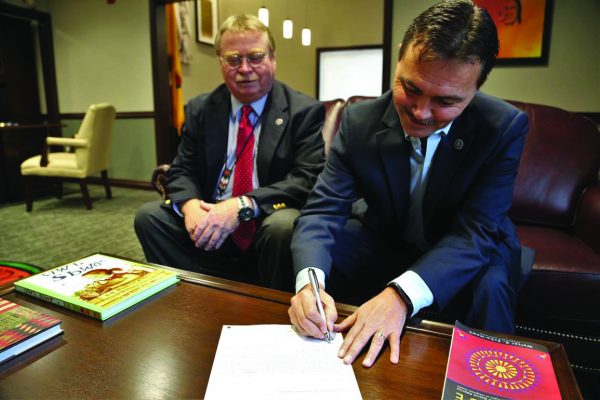 The Eastern Band of Cherokee Indians has joined hundreds of federally-recognized tribes across the country in receiving funds from a $940 million settlement in a class action lawsuit known as the Ramah Navajo Chapter Settlement.  Principal Chief Patrick Lambert signed a settlement agreement on Monday, Oct. 31 that gives the Tribe $1.2 million.

“This is just another example of Indian nations having to take legal action against a federal agency to correct a problem that has fallen under the trust responsibility of the federal government,” Chief Lambert said after signing the agreement on Monday.  “We are pleased that these mistakes were corrected, and we hope that native communities that suffered during those hard times are able to use these funds for services and programs for their people.”

According to information from the Office of the Principal Chief, since the funds were deemed a tribal expense, the money will return to the Tribe’s general fund.

The suit was first filed by the Ramah Navajo Chapter, a sub-unit of the Navajo Nation, in 1990.  The Oglala Sioux Tribe of South Dakota and the Pueblo of Zuni joined the suit as class representatives at a later date followed by other tribes throughout the years.  In all, there have been 699 tribes and tribal organizations involved in the settlement.

“Since 1994, Congress has capped the maximum appropriation the BIA could spend on contract support cost payments.  As a result, the BIA long asserted that it could not be held liable for any resulting underpayments.  In 2012, the United States Supreme Court held that capped ‘not to exceed’ agency appropriations in and after 1994 did not relieve the government of its contract obligation to pay full contract support costs to Indian Self-Determination Act contractors.”

Kevin Washburn, Acting Assistant Secretary for Indian Affairs, said in a comment last fall, “From the tribes’ perspective, underfunding of contract costs is another broken promise.  There is no longer any question that we agreed to pay these amounts and we are liable.”