The Eastern Band of Cherokee Indians is known for its talented artists.  Two EBCI tribal members proved that to be true as they won awards at this year’s SWAIA (Southwestern Association for Indian Arts) Santa Fe Indian Market. 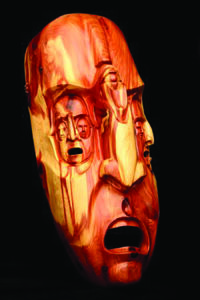 “It being my first year entering sculpture, I had zero expectations for an award this year,” said Adams.  “The sculpture category is, by far, one of the strongest classes at Indian Market and to be recognized by the judges at SWAIA is a dream come true.  I was honored just to be in the same category with some of my favorite artists.”

He won for a piece entitled “False Faced God”.

“It is an attempt to create a vision of God through Cherokee culture pre-Christian assimilation,” said Adams.  “Very little remains of our ancient religion, and the importance of a god head figure in any religion is extremely important.  I chose to carve seven faces in honor of the seven clans and the sacred number seven – each face having its own independent space, yet ultimately being part of one ultimate being.”

On the title of the piece, he related, “The title is based upon a culture term I continually ran across in my study of traditional Cherokee mask lore – False Face being the description of Cherokee masks carved by our ancestors for ceremonial use.  It is my vision for the great Creator or God.”

Goshorn won for a unique basket entitled “Swept Away”. 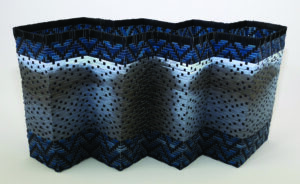 “Swept Away”, a unique basket by EBCI artist Shan Goshorn took a second place ribbon in the Outside the Southwest Baskets Division – Contemporary Category. (Photo courtesy of Shan Goshorn)

“The idea for this piece – including the title – visited me in a dream,” she commented.  “The resulting work is a 3-D interpretation of the basic Cherokee basketry pattern called ‘Water’, a design which is included around the base and the rim.  The finished basket is woven in a familiar Cherokee weave but expanded so the entire basket assumes the zig-zag of the pattern.”

She said that basket arose from a trip she took with her daughter to the Carlisle Indian Boarding School site in Pennsylvania.  “Wrapping around the basket is a mournful, evening photo of the Tuckaseegee River flowing through the ancestral Cherokee homeland.  This image, along with the river-like shape of the basket and plunging blue interior, epitomizes the deep sorrow and dark tide of removal experienced by Indian communities throughout the northern hemisphere over the sweeping loss of their children and way of life.  The interior features reproductions of the Carlisle student roster as evidence that we remember and honor the sacrifices these children were forced to endure.”