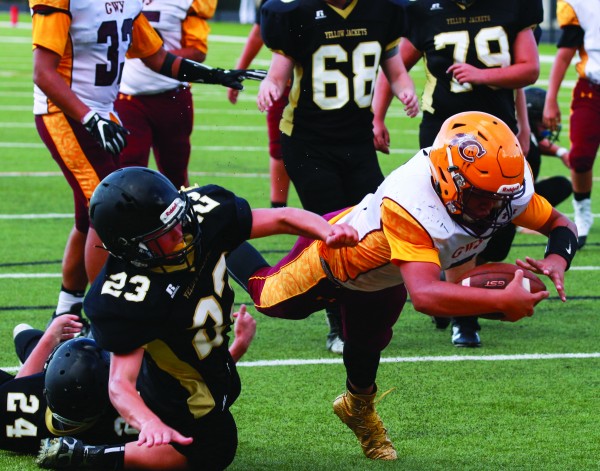 Bobby Crowe, JV Braves quarterback, dives into the end zone at the end of a 19-yard touchdown run in the first half of Thursday’s game at Hayesville. He ended the game with two rushing touchdowns and two passing touchdowns. (SCOTT MCKIE B.P./One Feather photos)

HAYESVILLE – The Cherokee JV Braves (1-0) got their 2016 campaign started off well on a hot and humid night in Hayesville.  Bobby Crowe, JV Braves quarterback, threw for two touchdowns and added two more with his legs as Cherokee won 28-16.

“We came out a little timid, but once they got out there, we did well,” said Bret Robertson, JV Braves co-head coach.  “They came out to prove a point, and I think they really did against a pretty good Hayesville team.  I think we’re going to build on it.  I know they’re ready to work.”

Co-head coach Spencer Moore commented, “I thought our kids responded well…our defense gave us good field position, and our offense executed when we needed to.  I think we sputtered out a bit in the second half, but I still think we did enough to get the job done.  We’re a work in progress right now.”

On paper, the game was relatively close with both teams getting 15 first downs.  Both teams threw one interception.  Hayesville lost two fumbles, and Cherokee lost one.

The Braves were led defensively by Ayden Evans with nine tackles followed by Cecil Walkingstick with eight and Jaden Welch, Caden Pheasant, and Rossie Wachacha with three each.

Cherokee got the ball first in this contest, but three plays in Hayesville’s Blake McClure intercepted a Crowe pass and returned it 18 yards to the Cherokee 27-yard line.  Five plays later, McClure ran 17 yards for the first touchdown of the game.  Meade Gibson ran for the two-point conversion, and the Yellow Jackets led 8-0 at the 6:10 mark of the first quarter.

The Braves weren’t phased though.  Cherokee started their second possession in great field position, at the Hayesville 49-yard line due to a 31-yard return by Tino Pete.  Five plays later, Crowe connected with Sterling Santa-Maria on a 33-yard touchdown pass.  The two-point conversion was good, but a block in the back nullified it so the Braves tried again.  The second two-point attempt failed, and Cherokee trailed 8-6 with 4:32 left in the first. 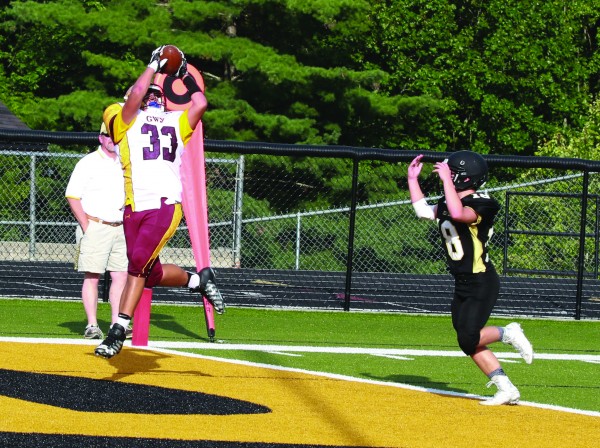 Even Hayesville’s Meade Gibson (#18) seems to signal a touchdown as Cherokee’s Sterling Santa-Maria (#33) makes a 33-yard grab in the first quarter.

The next three possessions of the game ended in three-and-outs and punts.

Cherokee started their fourth possession at their own 20-yard line and started a 10-play drive that would eat up over five minutes of the second quarter.  Crowe made two big throws in the drive including a 21-yard pass to Welch and a 25-yard pass to Dominick Flying.

Crowe finished the drive himself with a 19-yard quarterback keeper up the gut for the touchdown.  Again, the two-point try failed, and Cherokee took a 12-8 lead with 3:40 left before the half.

Hayesville struck fast on their next drive.  After starting in great field position at their own 48-yard line, the Yellow Jackets put together a five-play, two minute drive that culminated in a 34-yard touchdown pass from Jake McTaggert to McClure.

The two-point conversion was good, and Hayesville led 16-12 with 1:46 left in the second. 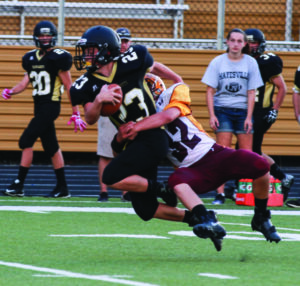 Cherokee was not satisfied going into the locker room trailing and put together a five-play, 87-yard drive.  Crowe connected with Caden Pheasant on two big pass plays on the drive including a 27-yard touchdown pass.  Crowe then found Santa-Maria for the two-point conversion to give the Braves a 20-16 lead at the half.

Hayesville got the ball first in the second half and began to put together a nice 10-play drive, but they wouldn’t get in the end zone.  Cherokee’s A.J. Allison intercepted a McTaggert pass ending the Yellow Jackets drive.

The Braves then put together a six-play drive that took nearly six minutes off of the clock.  The drive culminated with a 14-yard touchdown run by Crowe who then found Santa-Maria again on a pass for the two-point conversion to give the Braves a 28-16 lead with four minutes left in the third quarter.

Both teams got the ball three times more in the contest, but neither were able to move the ball and the game ended with Cherokee on top 28-16.

The JV Braves have an off week before hosting the Robbinsville JV Black Knights on Wednesday, Sept. 7 at Ray Kinsland Stadium.

“They’re already psyched up about it,” said Coach Robertson.  “We’ll just prepare and go from there.”

To view or purchase photos from this game, visit: https://onefeather.smugmug.com/SPORTS/FOOTBALL/JV-BRAVES-FOOTBALL-2016/At-Hayesville-August-25/

(Note: Official statistics are not kept for JV football games.  All stats provided here are compiled by One Feather staff at the game.)