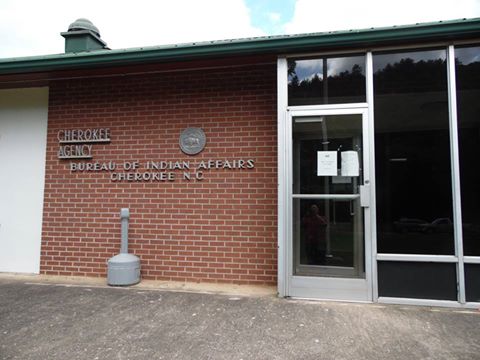 The Tribal Realty office has been closed and employees have been placed on administrative leave.  According to David Wyatt in Tribal GIS, it all began several years ago. In 2008, the Bureau of Indian Affairs (BIA) notified the Eastern Band of Cherokee Indians  that it was not within their scope of work under law to document and process land transfers that did not impact the trust and trust lands of the Tribe and that they were going to give the Tribe two years to learn the processes and take over the responsibilities. Even though the period of learning had gone long past the two years, the relationship between the Tribe and the BIA seemed amiable.

But sometime in the last two weeks, the relationship took an abrupt turn. The Superintendent of the BIA, Cherokee Agency posted the following notice on the doors of offices occupied by tribal employees in the Cherokee Agency building, “Authorized Persons Only, Security Clearance Required, Notice, 1. Access to these records limited to: Authorized Persons Only, 2. Information may not be disclosed from this file unless permitted pursuant to 43 CFR (Code of Federal Regulation) 2.56, 3 . These records may not be altered or destroyed except as authorized by 43 CFR 2.52, 4. The Privacy Act contains provisions for criminal penalties for knowingly and willfully disclosing information from this file unless properly authorized.”

In an email dated Aug. 11, 2016, Principal Chief Patrick Lambert addressed BIA Superintendent William McKee and copied Danny Davis, EBCI Attorney General. It reads as follows:
“Due to the highly unorthodox interference in our Tribe’s efforts to 638 contract the BIA Realty and Forestry services, coupled with the veiled threat issued against my Tribal employees by the local BIA office leaves me with no choice but to add protection over my employees and keep them from facing any potential criminal charges. I am placing all Tribal employees in Tribal Realty Services department on Administrative leave until the BIA clarifies its threatening nature and offers to our Tribe an agreement over the records. These actions by the BIA and its local employees will have a highly negative impact on our Tribe and its members and businesses. I am therefore urging you to take immediate action and cure this situation by sending forth an agreement clarifying our ownership of the local land records and lifting the threat of federal criminal prosecution against our employees for doing their jobs. Kindly awaiting your response…”

In an executive order with the same date, Chief Lambert suspended all Tribal real estate services. He also reference the Aug. 4 Tribal Council session in which Council rescinded a resolution passed giving negotiation and enacting authority to the Principal Chief for a “638 self-determination” contract between the federal government and the EBCI. The resolution to rescind was submitted by Wolftown Rep. Bo Crowe and Birdtown Rep. Albert Rose. They explained that the reason for their resolution was to allow time for the Council, Executive, BIA and employees to meet to discuss best options and for all parties to understand the implications of moving forward. Their resolution was passed, which, in effect, dissolved the Principal Chief’s authority to enter into an agreement.

According to the Executive Office, tribal employees were put in a position of imminent danger of prosecution due to the issuance of the memorandum by the BIA Superintendent. With the executive order, Chief Lambert ordered the tribal employees that occupied offices in the BIA building to refrain from entering the building and issued them administrative leave until the situation could be resolved.

Chris McCoy, Director of Communications for the Principal Chief, stated, “Principal Chief Lambert wants to make clear that all employees are on paid leave and he expects that the situation will be resolved quickly. This was a move to protect our tribal employees from the threat of Federal prosecution”.

There are currently 11 employees that were housed in the BIA building.

Until the situation is resolved, all real estate transactions that were in progress are on hold, according to both Wyatt and McCoy. Wyatt stated that federal land records and tribal land records are intermingled in the offices at BIA. Other issues that must be resolved are land records ownership, processes by which the tribal employees may access records for research and the ability of tribal members to access this information for their own research (similarly to access at county Register of Deeds offices).

In his responses to Tribal Council, Chief Lambert indicated that tribal employees were doing approximately 85 percent of the work with regard to possessory holdings.

As to the current situation, he said, “Trust responsibility by the Federal Government at its core needs to be reviewed. The BIA was designed to handle leases and the outer boundaries of Cherokee lands, not possessory holdings. This stalemate affects any Tribal program that utilizes these records, and we will not put the livelihood of our employees at risk while, they, the BIA, decide how to work this out”.

It is unclear whether the employees will return to the BIA building or be located in alternative offices, exactly who maintains ownership of the building, and whether or not the Federal employees in the building are able to access the offices of the Tribal Realty employees who are on administrative leave.

Neither Superintendent McKee nor Attorney General Davis could be reached for comment at press time.