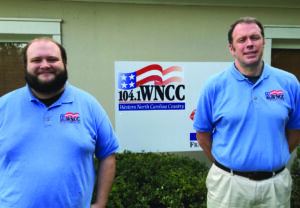 Announcers for the Cherokee Braves football season on WNCC include Dustin Short and Sean Gibson. (Photo courtesy of WNCC)

104.1 FM WNCC in Franklin has announced that they will be carrying Cherokee High School varsity football for the 2016 season. WNCC may be heard in most or parts of Macon, Jackson, and Swain counties.

According to Sean Gibson, the general manager of the radio station, he plans to carry all of Braves games at home and on the road. Gibson will also be providing play-by-play for the games and another station announcer, Dustin Short, will provide commentary.

Gibson said, “We are very excited about bringing Cherokee Football action to western North Carolina through are newly expanded coverage area. We think it will be a huge plus to the school and the community”.