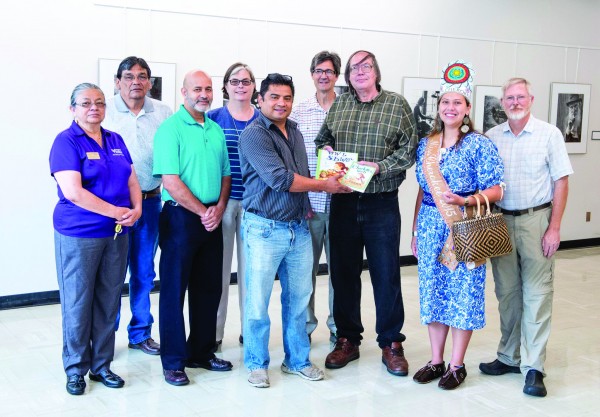 The one-of-200 edition of “Charlotte’s Web” was translated into the Cherokee syllabary developed by Sequoyah by Myrtle Driver Johnson, EBCI Beloved Woman. The book, first published in 1952, tells of a friendship between a spider and a pig, and is generally considered an enduring example of great children’s literature.

In turn, WCU presented the New Kituwah Academy, a Cherokee immersion school, with card games for learning Cherokee pronouns and a Cherokee language board game, created by graphic design students and produced by the university’s print shop.

“This was a great learning experience for my students,” said Mary Anna LaFratta, associate professor of graphic design. “Students enrolled in ‘Intermediate Cherokee’ and I introduced the project to the design students, who were excited to be involved in work with real-world applications.”

Among those attending the presentation ceremony on Wednesday, June 15, were Taran Swimmer, a WCU graphic design student and current Miss Cherokee; Ricardo Nazario-Colon, WCU’s chief diversity officer; and Bo Lossiah, instruction supervisor at New Kituwah Academy and a WCU alumnus, who presented the book. Accepting the donation for the university was George Frizzell, director of Special Collections who retires June 30, after a 34-year career.

“When the New Kituwah Academy wanted to honor Western Carolina University by presenting this copy of ‘Charlotte’s Web,’ we immediately thought of the Special Collections section of Hunter Library,” said Roseanna Belt, director of the WCU Cherokee Center. “George Frizzell has maintained an extraordinary collection of Cherokee artifacts and rarities over the past years so we felt that would be the appropriate place. It gave me a proud feeling to know this book would be appreciated and looked after, even though George is retiring at the end of this month.”