Patrick Bradley Allison, 42, an EBCI tribal member and tribal employee, was killed as the result of a head-on collision that occurred on Birdtown Road (US-19) on the morning of April 14, 2015.  More than a year later, Michael Dean Tomes II, the driver of the vehicle that hit Allison’s vehicle, has pleaded guilty to a federal Involuntary Manslaughter charge.

The charge, a felony, carries a maximum sentence of eight years in prison, a $250,000 fine or both according to Department of Justice Officials who related that a sentencing date for Tomes has not yet been set.  The original indictment stated that Tomes was “driving a vehicle upon a highway or public vehicular area carelessly and heedlessly in willful and wanton disregard of the rights or safety of others…”

A six-page Factual Basis document was signed by Freilyn Sison, Tomes’ attorney, last month.  The document contains interviews with various witnesses involved in the case including Lacey Hamm, identified as Tomes’ fiance’.  According to the court document, Tomes told her he was going to get some food at the Waffle House in Cherokee early on the morning of the accident.  “Laci then got calls from EMS and CIPD about Tomes being in an accident.  He returned to the room that afternoon and was upset.  They stayed another night before going to a different hotel.  She said she did not find out about the death until the insurance company called two weeks later.  In a written statement, she said that Tomes had come into the room around 2am and that they ‘shared a beer’.”

The document states that Tomes told officials he had not had a driver’s license since 2011.  The document also states that at 10:21am on the morning of the crash, “Tomes’ laboratory result was positive for Benzodiazepine (WebMD states “Benzodiazepines are a type of medication known as tranquilizers.  Familiar names include Valium and Xanax”).  The report states that they have not been verified by a second confirmatory procedure and that unconfirmed reports should not be used for forensic purposes.” 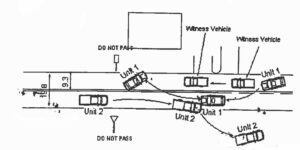 The Cherokee Indian Police Department report on the April 14, 2015 fatal collision in the Birdtown Community includes this diagram which shows the alleged sequence of events. Vehicle one was driven by Michael Dean Tomes II and vehicle two was driven by Bradley Allison. (Image from CIPD report)

The document states that Anthony Sequoyah, then with Cherokee Tribal EMS, gave a written statement of his observations at the scene.  “He stated that he was approached by a white male with dark-colored pants, no shoes, and slurred speech,” the court document states.  “The man was very anxious and stated his name was Michael Tomes.  Sequoyah asked him if he was involved in the wreck and Tomes said he was the driver of the SUV, that he had bent over to pick something up off the floor and when he looked up it was too late to get over.”

Swain County EMS worker Adam Barker was interviewed and according to the document stated, “Tomes initially denied alcohol or drug use but during transport said he took his Xanax at 10pm the night before.  He denied taking oxycodone.”

The Cherokee One Feather made an official public records request for the official Cherokee Indian Police Department (CIPD) report in January 2016, and the paper received the report, with parts redacted (blacked out) by the EBCI Attorney General’s Office, on April 4.

The report includes a diagram, completed by the CIPD, which shows the driver of vehicle one which was traveling westward, driven by Michael Dean Tomes II, allegedly attempting to pass two vehicles on the left and striking vehicle two, driven by Allison, head-on.  The report states that “vehicle one came to rest on the westbound shoulder of U.S. 19.  Vehicle two traveled down an embankment and came to rest off the eastbound shoulder.”

Also in the report, CIPD Patrol Officer Bryan S. Chekelelee gives a narrative in which he interviewed Tomes.  “Officer B. Chekelelee asked the driver which lane he was traveling in and the driver stated he was not sure for sure, he didn’t recall.  Officer B. Chekelelee asked the driver what exactly had happened to cause the wreck and the driver stated that he was trying to swerve to avoid hitting a white car and next thing he knew, he heard a loud bang, the loudest bang he had ever heard and then next thing he knew he was in pain and standing outside of his vehicle.”

“Officer B. Chekelelee then asked the driver where the white car was located at that time he was trying to miss and the driver closed his eyes (which looked as if he was in a lot of pain) and said he didn’t remember.  The driver stated he didn’t even remember where he was at.”