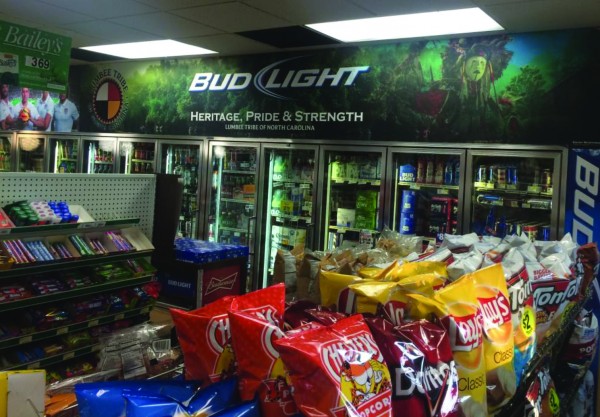 A refrigerator at a convenience store in Raeford has a Bud Light advertising display above it that has drawn the ire and a lawsuit from the Lumbee Tribe of North Carolina. (Images from lawsuit filing)

Advertisements for Bud Light and Budweiser popped up recently in the eastern part of North Carolina that drew the ire of members of the Lumbee Tribe of North Carolina.  The ads featured the Lumbee tribal seal, the name of the tribe, and a photo of a tribal member – all without contact or permission from the tribe itself.  The slogan, “Heritage, Pride, and Strength” is emblazoned on the ad as well – a slogan the Lumbees say they have used since July 2015.

Now, the Lumbee Tribe has filed a lawsuit (Download PDF of suit) in the matter claiming trademark infringement over the use of its seal.  The 18-page suit was filed in the Eastern District of North Carolina U.S. District Court on Tuesday, June 14 and lists Anheuser-Busch, LLC and R.A. Jeffreys Distributing Company, LLC as plaintiffs.

The Lumbee Tribe, a state-recognized tribe in North Carolina, is seeking both injunctive relief and an unspecified amount of damages in the case.

Harvey Godwin Jr., Lumbee Tribal chairman, took to Facebook on Thursday, June 9, as the controversy began to boil, and issued the following statement on the Lumbee Tribal page, “I want to inform the tribal membership that the Lumbee Tribe did in no way authorize R.A. Jeffries, the local Budweiser distributor, to use the tribe’s logo, website information or an image of a tribal dancer in a recent beer advertisement posted at several area convenience stores.” 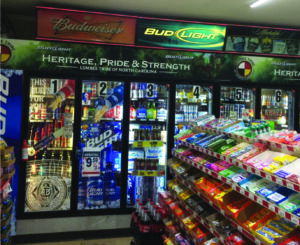 A beer refrigerator at a store in Lumberton shows one of the ads.

He went on to state, “As alcohol and drug abuse are often associated with Native American culture, the use of the Lumbee tribal brand and an image of a Native American dancer in an advertisement promoting an alcohol product is viewed as particularly offensive to Lumbee people.”

A day after the suit was filed, R.A. Jeffreys released the following statement to the press, “In this matter, R.A. Jeffreys developed some point-of-sale advertising materials that were intended to honor the rich heritage of the Lumbee Tribe.  These materials were developing by R.A. Jeffreys without the involvement, input or knowledge of Anheuser-Busch.”