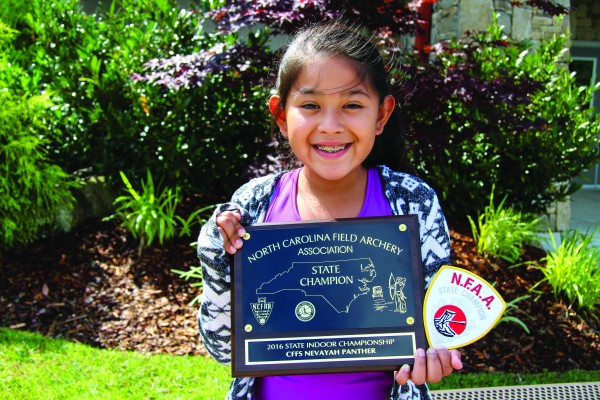 She may be small in stature, but don’t let that fool you when Nevayah Panther picks up a bow.  The 9-year-old EBCI tribal member recently won the state championship at the 2016 N.C. Field Archery Association (NCFAA) State Indoor Championship.

Shooting since she was 4-years-old, Panther took third place at the Indoor Championship event twice before (2013, 2014).  When on the line to shoot, she clears her mind and thinks of one thing, “Follow through.”

Archery is definitely in her blood and is a family activity for the Panthers.  Her older sister, Kendra, won the NCFAA state indoor championship twice herself (2012, 2013) and her father, Deino, is both an archery instructor and a competitive shooter having placed second (2016) and third (2013, 2014) at recent championships.

He said they enjoy traveling to archery competitions and have traveled to the NFAA Indoor Nationals several times including this year’s event, which was held in Louisville, Ky., where Nevayah placed 16th in the nation.  “That was a big accomplishment,” said Deino.

Nevayah practices around three or four times a week and said she would highly recommend the sport of archery for other young people. Deino helps teach archery to young kids and teens at the Big Y Community Center on Tuesdays from 6:30-8pm.  He related that the group is open to all interested in the sport.

With Rio 2016 a little more than a month away, the question was posed to Nevayah as to whether she ever thought about the possibility of competing in archery in the Olympics.  “Sometimes,” she said smiling from ear-to-ear.