Joyce Cooper is leaving as the membership manager for the Museum of the Cherokee Indian. She expanded a very basic membership program that had existed for four or five years and, as a result of a complete business assessment the Museum went through, began a process of revamping membership acquisition to 21st century techniques.

When she came on board, there were approximately 100 members. Members are like donors with benefits. A person may contribute monetarily to the operations of the Museum, which makes them “members” of the Museum. In this way, anyone may help in preserving the history of the Eastern Band of Cherokee Indians. Cooper took the role of finding best practices to increase the number of people aware of and interested in becoming members. A grant was obtained to pay for this work to be done, basically a six-month project.

In 2002, Joyce had retired after putting in 30 years with Haywood Community College. So, her retirement plans got sidetracked a bit with this new opportunity. She enjoyed working with the Museum members and recruiting new ones. Over the years, she has been able to grow the base to over 1,200. Cooper enjoyed computer challenges and said that one of the fun things working with the Museum was all the computer challenges, particularly with the creation of the Timberlake exhibit. In addition, she learned to host a website and work with the Museum’s online store. 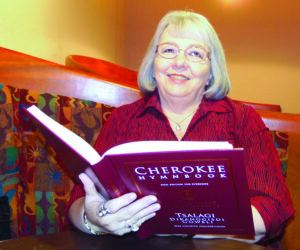 Joyce Cooper, recently retired from the Museum of the Cherokee Indian, holds a copy of the revised Cherokee Hymnbook, a project she was proud to have worked on. (ROBERT JUMPER/One Feather)

She learned a great deal about the Cherokee culture and history that she would have never had known without her work experience at the Museum. “It is such a good museum,” she said, “and, I have been in museums all over the United States and I would love to see more local people take advantage of it.”

Dan Dills, who sang with the Robbinsville/Snowbird choir, came to the Museum a while ago to propose an update to the old Cherokee Hymnbook from the early 1800s. He wanted to expand it to include music, phonetics and syllabary. Cooper took the hymns, removed all the words, took the phonetics prepared by Dills, “slide it into the music, lined them up, sized everything, and that was my part” she said.

For the new Cherokee Hymnbook, Cooper worked approximately 600 hours making sure that the parts were inserted and lined up. All of the work was done via computer using Photoshop, a graphics program. Her hopes are that choirs will use it forever. She says that she was “thrilled to death” to be part of that particular project.

“My mom and dad taught me it was all about giving back. After my first retirement from Haywood Community College at age 52, my daddy (who lived with Joyce for ten years) said, ‘Now what are you going to do? It is time to give back’.”

So, she busied herself in the Cherokee community, mowing and weed-eating the cemetery and churchyard, worked with the Rocky Mountain Elk Foundation to re-introduce elk in western North Carolina and volunteered at the Talking Trees Children’s Trout Derby in order to give back.

Cooper plans to visit many friends that she has not had the time to keep up with as she would have liked to during her careers. A glimpse at a 2014 adventure she took might give some idea of what her upcoming years hold.

“I went out to Missoula, Montana on a business trip for the Elk Foundation.” She has been the state chairperson for North Carolina of the Elk Foundation for the past six years. She went with friends from Sylva, who had purchased a mule pack trip in the Shoshoni National Forest and invited Joyce along. “They talked me into going camping with them and riding that mule. So I did. It was 11 miles into the forest and all I did productive was throw logs on the fire”. She quickly adds that she did some reading and communed with nature along the way as well.

She thanked Ken Blankenship for the opportunity to have worked at the Museum. “I have learned so much.”