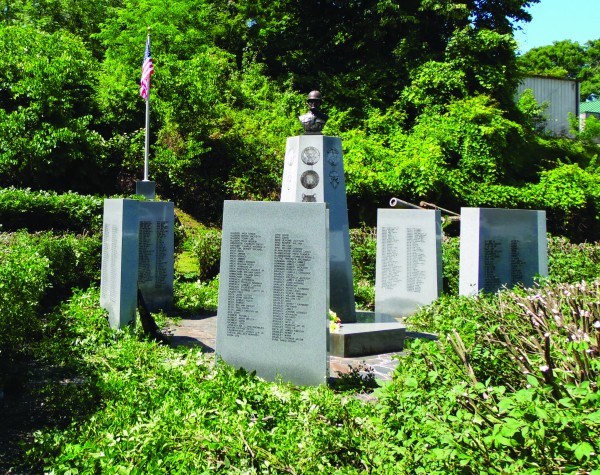 Plans are underway for a complete facelift of the Cherokee Veterans Memorial Park. (ROBERT JUMPER/One Feather)

Principal Chief Patrick Lambert and the Cherokee veterans had a meeting last week to discuss the location of the PFC Charles George bronze that has been commissioned in honor of George’s heroic service in the military. All agreed that the bronze will be placed adjacent to the current memorial park at intersection of Tsali Boulevard and Council House Loop.

As they discussed the location, many areas of concern had arisen about the current state of the memorial park. There are several landscape and esthetic issues that detract from the purpose of the memorial park, which is to show respect and honor those who have served in the armed forces.

“With both our Principal Chief and Vice Chief being veterans in service to our country and our Tribe, along with the many tribal members and their families who have given so much in sacrifice to our protection, it is high time we show this memorial area the attention it needs”, said Sage Dunston, Chief of Staff for Principal Chief Lambert. 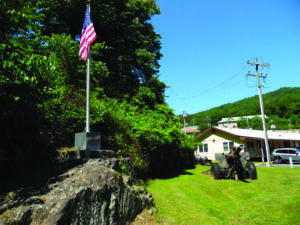 Lights will be installed so that the flag will be lit at night to be in line with U.S. Flag Code.

There is a laundry list of changes that the Executive Office is taking on with the help of local veterans. The plan calls for a professional cleanup of the granite slabs containing the names of deceased veterans. Currently, some of those slabs have mold and detritus to the point of obscuring names. The granite will be carefully cleaned so as to restore the view of each name.

One of the items brought to Chief Lambert’s attention was the fact that the flag that sits on the hill above the memorial is unlit. The veterans advised that if a flag is to be displayed around-the-clock, then protocol demands that it be lit during the night hours. So, there will be lights installed at the flag pole.

Plans include extending the rock walkway from the granite slabs memorial display to the base of the flag and provide bench seating for those who would like to sit and reflect near the memorial. 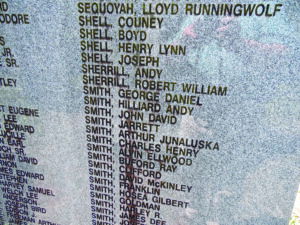 The plan calls for a professional cleanup of the granite slabs containing the names of deceased veterans. Currently, some of those slabs have mold and detritus to the point of obscuring names.

There is also discussion of renovation of the two artillery cannons and the tank that the Tribe owns. Over the years, they have fallen into serious disrepair due to neglect. Some suggestions for cleaning them up included enlisting the JROTC to clean and paint the artillery cannons, and the veterans are in contact with a military hardware restoration expert who offers the potential of bringing the tank back to its full glory at no charge to the Tribe.

There will be a covered area built for picnicking and special events at the park. Even the memorial art bear will receive a cleaning and touch up.

The Executive Office also wants to protect the park from any vandalism or other mischief that could detract from the reverence of the location. So, security cameras will be installed to ensure the safety of the memorial and the people who visit.

Facilities management was on site Friday, June 10 trimming down the hedge surrounding the slab statuary so that memorial may once again be seen from the roadside and doing a general cleaning up of the area. No clear timeline has been set for the implementation of the other renovations and the arrival of the Charles George bronze.