GAINESVILLE, Ga. – With each gentle scrape of the trowel, the underside of a large broken pottery vessel emerges from the dirt in a peaceful river valley in the Chattahoochee National Forest. Artful coils and swirls are stamped on the fired clay. A few feet to the left, the remains of a clay wall and burned wood help paint the story of what might have happened at this family farmstead 400 years ago.

“The extended family that occupied this site were likely forerunners of the Tribe we know today as the Cherokee,” said Chattahoochee-Oconee National Forests archeologist James Wettstead. “Each pottery piece helps us determine how these people lived in the early 1600s and why they were here.” 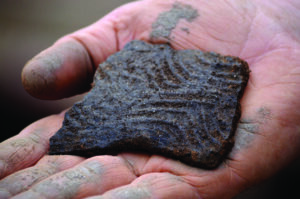 The photo shows a piece of fired clay, with artful coils and swirls, that was found during an excavation on March 10.
(Photo by Holly Krake/USFS)

And why they were here is a very important question. As disease and warfare introduced by Spanish explorers tore apart the region in the 1540s, native people coped however they could. By approximately A.D. 1550, Native American mound building across the southeast had all but ceased, and it would not be until approximately A.D. 1670 that English explorers arrived and documented the Cherokee in northern Georgia. Now in the third year of excavations, more details from this site — radio-carbon dated to A.D. 1600-1615 — are being revealed.

“This year, we are able to confirm a square house roughly 600 square feet in size with a well-developed center hearth,” said Dean Wood, principal investigator from the firm Southern Research. “But questions still remain. Were they farmers? Refugees from regional warfare? What brought them to this valley?”

As the National Historic Preservation Act celebrates 50 years, local volunteers are gaining the experience to become leaders in preservation and cultural heritage for future generations. Working in small groups, local volunteers with the Passport in Time program are helping answer these questions. Volunteers helped recover more than 1,000 pottery sherds using large wooden shakers to separate the dirt from the artifacts. Several test pits were also excavated looking for pottery, stone tools, and additional outbuildings used by the family.

“The value of this site is not in the artifacts themselves — those have little monetary value,” added Wettstaed. “Rather like a page in a book, each artifact is valuable because it helps tell the full story of what happened here — our story, the human story.”

A complete photo album of the excavation is available at tinyurl.com/n6czybf as well as a YouTube video at tinyurl.com/z9m9pnp. Work at the site is carried out each year in partnership with the University of Georgia, Southern Research, Eastern Band of Cherokee Indians Tribal Historic Preservation Office and volunteers from the Passport in Time program.