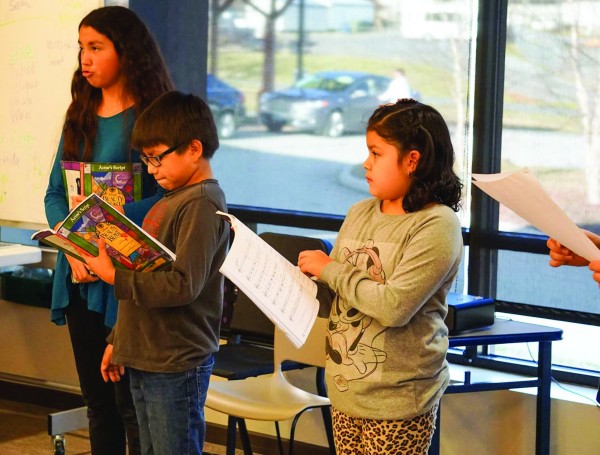 New Kituwah students Abigail “Salalisi” Taylor, Kallup “Tsisdu” McCoy Jr. and Cameron “Tsawayagi” Jackson practice a song for the school’s upcoming production of “Beauty and the Beast” which will be performed entirely in the Cherokee language. (Photo by Renissa McLaughlin/New Kituwah)

For two days in early June, the Chief Joyce Dugan Cultural Arts Center will be filled with the familiar tunes of “Beauty and the Beast” including the toe-tapping “Be Our Guest” and “Belle” – all of which will be sung in the Cherokee language.  The New Kituwah Academy Drama Club will perform the play, which has been translated locally into the Cherokee language, on Thursday, June 2 at 7pm and on Saturday, June 4 at 2pm and 7pm.

“They know most of the songs in English to start with, and also, we knew that if we did it in Cherokee, the audiences would already be familiar enough with the story that we wouldn’t have to provide a ton of background information for them to be able to understand it,” said Sara Snyder, New Kituwah Academy music and arts teacher, of the school’s decision to choose the play.  “We’re hoping that this will be used as a sort of community outreach project to in that audiences will be able to pick up on certain words.  They’ll hear them over and over again.”

The process for the school to perform the play began in October 2015 during a brainstorming session.  Once they decided on “Beauty and the Beast”, the school had to go through the process of ordering the show kit, getting licenses, and then getting permission to translate it into Cherokee.

Snyder said translating the play has been a community effort.

She added, “The beauty with us working with multiple speakers is that the kids have come across dialects that they’re very familiar with and have also come across new dialects and new words, and that has been a little bit of a challenge, but the kids have really enjoyed doing it.”

Snyder said the Drama Club has been working on the play twice a week since January.  Those sessions will increase to three times a week in May as the performance date nears.  “This is the most complex project that we’ve ever done.  It’s a lot of commitment from students, especially in the spring when they’ve got lots of things going on. They’re working really hard.”

Brake said the music and songs have been a challenge and she praised the student’s efforts.  “The kids have been wonderful.  They’ve really rallied, and the community has come together too.  The fluent speakers have really come together to make this a priority.”

Tah Tah Yeh Swimmer, fourth grade, is playing the part of Belle – one she said is very fun, but also very challenging.  “When we sing in Cherokee, it is very hard.  It’s kind of hard to learn new words.”

She said it has been challenging getting the timing right on the songs and remembering lines, but she added that doing the play in the Cherokee language makes her proud.  “It makes me feel that I’m representing my school, but then again, I don’t think some people will understand it.”

Praire Toineeta, sixth grade, enjoys the songs and will sing on the songs “Belle” and “Gaston”.  She stated, “It’s been fun.  I’ll be playing a silly girl, and that’s one of the girls that fall for Gaston.”

Brake said this year’s production is a departure from what the Drama Club has done in the past.  “This is the first time we’ve done a production by translating something that was copyrighted.  We’ve usually translated things the kids have written.  This is our third year of doing Drama Club, so the first year the kids did a story called ‘The Deer and the Bunny’ and then we did a story on ‘The Past, Present and Future of the Cherokee Language’.”

“The plan for next year is, instead of doing a play like this, we’ll have the students dubbing the voices for the film, and then we’ll show the film.”