Robin Swayney, an EBCI tribal member and Qualla Boundary Public Library manager, is set to receive the Cultural Heritage Award from the Asheville-based conservation group Wild South.  The award, part of the Roosevelt-Ashe Conservation Awards, will be given during the 8th Annual Wild South Green Gala on Saturday, May 7 in Asheville.

“I am humbled and honored to receive the award from Wild South,” said Swayney.  “It has been wonderful to be a part of the efforts of Wild South Conservation to conserve, preserve and provide access to materials of Cherokee culture and scholarly significance.  As an advocate of knowledge, it is essential for the preservation of the Cherokee history.” 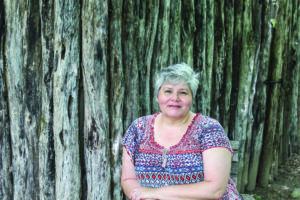 She added, “The Eastern Band of Cherokee Indians has always demonstrated a substantial interest in protecting, accessing, and controlling the Tribe’s natural and cultural resources.  These resources may include not only land and objects but also traditions, languages and symbols.  Access to and usage of these natural cultural resources, as well as public awareness and understanding of Native cultural practices and traditions, is integral to the preservation of Native life and the unique contribution they make to our Nation.”

In December 2015, several members of the Wild South Cultural Heritage Team, traveled to Harvard University’s Houghton and Lamont Libraries to research missionary records from 1818-1850.  “Hundreds of Cherokee children are listed in the records, which include syllabary, class materials, and lists of Cherokee words, some of which might have been lost over time,” said information from Wild South.

The team photographed 17,795 records which are being hosted, through a joint effort, at the Qualla Boundary Public Library.  The records also include little known information including “how the Cherokee used the buffalo which was once abundant across the Southeast, for food, clothing, robes and hides for bedding”.

Swayney commented, “By honoring and preserving the sacred places, archaeological sites, landscapes and cultural traditions of the Cherokees, we enrich our shared understandings of history and connections with place.”

Several other awards will be given at the ceremony on May 7 including:

Pat Byington, Wild South executive director, commented on the awards ceremony, “This is an opportunity to honor conservation leaders from around the South for their dedication, commitment and accomplishments in their fields.  It is truly an inspiring process that Wild South is proud to lead.”

Info: Tickets are $35 for the event, www.wildsouth.org