Since joining the Cherokee Indian Hospital (CIHA) Pharmacy two years ago, Elicia Montelongo quickly became one the most dependable and impactful technicians said CIHA officials.  Now, she has been recognized nationally as the Indian Health Service Pharmacy Technician of the Year. 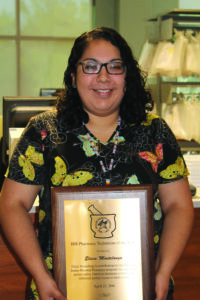 Elicia Montelongo, of the Cherokee Indian Hospital, has been named the Indian Health Service Pharmacy Technician of the Year. (Photo by Lynne Harlan/CIHA)

Montelongo achieved her Pharmacy Technician certification (CPHT) within her first year and quickly established herself as a leader in the department by taking the initiative and lead on several projects. She worked as a Cherokee Hospital Transition Committee Member, part of a multidisciplinary team comprised of nursing, medicine, pharmacy, and community representation where she helped to define the workflow and technician duties for the new CIHA Inpatient Pharmacy.  She worked with the committee on designing and executing workflow simulations and was ultimately instrumental in the creation of a new dedicated Inpatient Technician position, the first of its kind at Cherokee Indian Hospital.

“She has excelled as the Inpatient Pharmacy Technician and has made several key improvements to the Inpatient Pharmacy including the development and application of a new system to track medications, converting paperwork to a digital format, improved inpatient supply system to reduce waste, implemented a new process of monitoring medication schedules, and several other process improvement projects,” said CIHA officials.

In addition to her improvement works, she mentors and trains new staff while maintaining her regular duties. Montelongo participates in hospital community outreach activities such as Christmas Angels, and has assisted with pharmacy influenza events such as the Drive-By Flu Shot Clinic.