Cherokee Elementary School celebrated its annual Cultural Heritage Week from April 4-8.   Every year, students are given the opportunity to meet local artists, invoke the Cherokee language in a non-classroom setting, and learn about Cherokee Culture in a fun way.  The week long activities included Honoring Our Grandparents, arts and crafts, Quiz Bowls, Foods Day, and Staff Jeopardy. 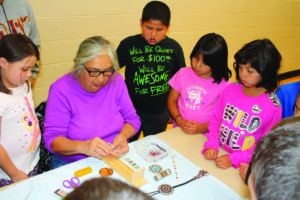 On Tuesday, local Cherokee artists met with students to demonstrate their crafts and speak to the students during the Artist Exhibition day.  Special guests included: Louise Goings, Butch Goings, Ruth Lossiah, Sharon McCoy, Lori Reed, and James Welch.  Students were able to witness crafts being made and ask questions directly to the artisans regarding materials used and tools needed while getting to view and touch the student-friendly and safe items.

Thursday was when the Elementary was treated to a special Foods Day event that featured a sampling of traditional Native foods including bean bread, biscuit bean bread, fried chicken, fatback, ramps with eggs, lye dumplings, and “grease,” as well as apple treats.  They also had the honor of watching Nora Panther as she prepared fresh, great tasting boiled cabbage and water creases right before their eyes. 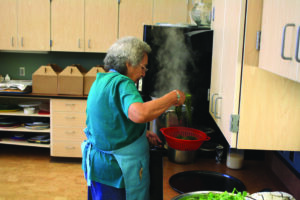 Friday brought about the continuation of a student favorite as they were able to enjoy watching their teachers compete in the Staff Jeopardy Quiz Bowl. Once again, teachers and staff from various departments competed against each other in the rough and tumble arena of Cherokee Culture and Language.  When it came down to Final Jeopardy, three teams were left to answer the final question including the Hope Center, third grade, and fifth grade.  The ultimate Champions for the 2016 staff Jeopardy Quiz Bowl were the “Lady Warriors” of the Hope Center & Pre-K.  Their team consisted of Consie Girty, Alisha Long, Brittany Moore, and Hope Garcia.

Cultural Heritage Week is sponsored by the Cultural Department.  “We want to thank each and every artist and participant who came out and gave a part of themselves and their valuable time to our children,” Cultural Department staff related.  “We also wish to express our appreciation to the many staff members who helped out with each event, especially the Cultural Arts Center staff, Activities staff, and Cultural Staff.”