In the past week, Cherokee has had three wildfires that have burned over 300 acres.  Fires started in the Yellowhill, Big Cove and Birdtown Communities.  No injuries or structural damages were reported in any of the fires according to Anthony Sequoyah, EBCI Secretary of Public Safety.

The Yellowhill fire started on Sunday, April 17 on Conseen Drive off of Johnson Arch Road.  Principal Chief Patrick Lambert reported on Tuesday, April 19 that the fire was 100 percent contained. 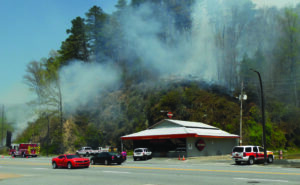 As stated, no structural damages were reported, but Chief Lambert did relate, “A tree fell across Acquoni and damaged the walk bridge close to the (Oconaluftee) Island pull-off.”

Sequoyah said a total of 200 acres burned in that fire and an investigation has been launched with a report of its cause expected soon.

He said the terrain of the area was a challenge in containing this fire.  “That area in the middle of town and through Acquoni Road is straight up, rock cliffs.  It’s hard to do anything with that other than just let it burn.”

A mop-up to hit any remaining hot spots on the Yellowhill fire started on Tuesday afternoon, but the two others fires have slowed that process.  “The mop-up is going pretty slowly due to the fact that we had to pull our resources and put them on the Big Cove and Birdtown fires,” said Sequoyah. 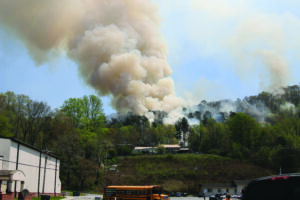 Smoke bellows from behind the Yellowhill Baptist Church on Monday, April 18 due to a wildfire that started the day before. (Photo by Brandon Stephens)

The fire in Big Cove started on the morning of Wednesday, April 20 and has burned 100 acres of as Thursday morning.  “It appears that somebody set it,” said Sequoyah.  “There is no more information or suspects at this time, but it appears that it was intentionally set.”

The same agencies were involved in fighting the Big Cove fire.  “They’re hoping, if this wind will die down, to have it contained today,” Sequoyah noted.

The Birdtown fire started off of Old #4 Road.  Sequoyah said it was a brush fire that burned around three acres.  It was extinguished on Wednesday, the same day it started.  Several firefighters were on scene on Thursday hitting some of the hot spots to make sure it didn’t start up again.

“It’s a combined effort of state, federal and local agencies,” Sequoyah said of the fighting of the three fires.  “The Cherokee Fire Department has done an awesome job protecting structures and residents.  They were literally out all night on the hour checking residences in Big Cove making sure they weren’t threatened.”

He added, “The Chief’s Office has been attending to all of the needs of the firefighters.  Their help and support is greatly appreciated.”