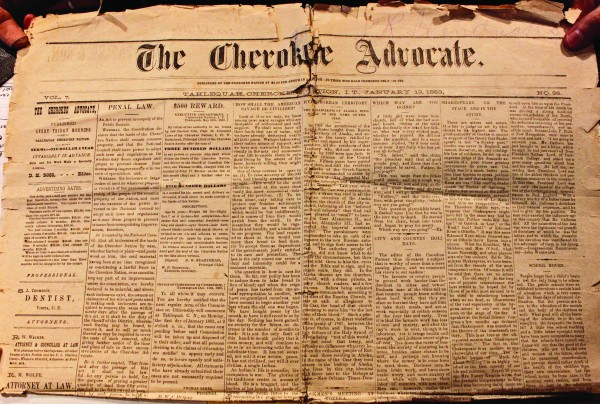 Joel Nelson, owner of a Civil War shop in Chickamauga, Ga., and his wife, Martha, planned a trip to Cherokee for this week.  Before he left home, he purchased a copy of The Cherokee Advocate, dated Jan. 1, 1883, from eBay.  He had asked the seller to make sure to get the paper to him before he left for Cherokee, as he wanted to bring it with him to donate it to the Museum of the Cherokee Indian which he did on Wednesday, April 20.

The paper itself is a four-page edition with the third page being printed in the Cherokee Syllabary.  According to the Oklahoma Historical Society (OHS), “The Cherokee Advocate newspaper was published at Tahlequah by the Cherokee Nation from 1844 until 1906.  Authorized by the Cherokee National Council on Oct. 25, 1843, the first issue was printed on Sept. 26, 1844, with the motto ‘Our Rights, Our Country, Our Race’.”  OHS information also stated that, at the time, it was the country’s only tribal newspaper. 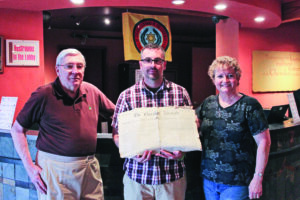 Ethan Clapsaddle, Museums archivist, commented, “It’s one of the cooler pieces I’ve seen donated.  It’s a really good glimpse into post-Removal from the Western perspective.  It is interesting to look at the mindset of the times.”

He added, “With the issues that were going on and with the tie-in with the syllabary still being used, it’s just a neat donation to get.  It’s one of those rare pieces.”

Clapsaddle said the newspaper is a “rare, one-of-a-kind pieces that we rarely get”.

He said the Museum has a textile conservator coming to the Museum to look at various items including the Thomas Legion flag, several portraits and other items.  “When we finalize the contract with the conservator, I’m going to have her look at this piece and a couple of other pieces.”

He went on to commented, “It’s in definite need of conversation, but right now I’m looking at it from more of a preservation aspect.  You’ve got to preserve it first.  The conservancy is making it the best it can be.  Preserving it is just holding on to what you’ve got and not letting it deteriorate any more.  So, that’s sort of the first goal.  We’ll take care of it as far as putting it in archive-quality containers.”