Harrah’s Cherokee Casino Resort security officials were directing traffic around the casino parking deck on the afternoon of Friday, April 15 due to a collapse in the structure earlier that morning.  The collapse was the second type incident at the casino in a 14-month span. 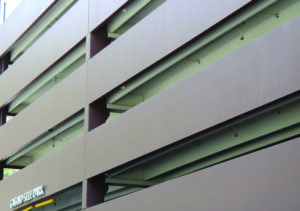 A component failure on the first floor ramp of the casino parking garage at Harrah’s Cherokee caused a partial collapse in the structure on Friday, April 15. (Note: One Feather staff was denied access to the area by security officials to garner photos of the damage. Staff was directed to casino officials and awaits a time to garner photos safely.) (SCOTT MCKIE B.P./One Feather)

“A component failure occurred on the first floor ramp, leading to the second floor,” said a statement from Harrah’s Cherokee officials.  In their initial report, casino officials stated that there didn’t appear to be any injuries, but a later report from them confirmed that “one minor injury” occurred.  They did not disclose the identity of the person injured or give the extent of their injury.

“The safety of our employees and guests is our primary concern.  A safety assessment is in process.”

Casino officials said a “full and comprehensive engineering study” is currently underway with results expected sometime this week.  “Until they are done with their work, we will not have any further updates…guests are asked to part in the surface lots on the west side of the casino property and other alternative parking areas are being identified.  Casino employees will be moved off-site to allow convenient parking for guests.”

The hotel parking deck, which had been closed since part of it collapsed in February 2015, re-opened recently.  The Tribal Casino Gaming Enterprise (TCGE) filed a lawsuit in federal court against several construction companies it alleges are responsible for that collapse.

In the 2015 incident, a part of the ramp leading to the third floor of the hotel parking deck collapsed.  No injuries were reported in the first incident.