ON THE SIDELINES: If you build it, they will come

It’s no secret that I’m a sucker for Kevin Costner sports movies so the title of this column should come as no surprise.  The phrase, “If you build it, they will come,” was uttered throughout the classic 1989 baseball movie “Field of Dreams”.

There is a lot of credence to that saying though.  Several years ago, when Cherokee Central Schools was transitioning from old, outdated buildings to the new, state-of-the-art school complex that they have today off of Big Cove Road, choices had to be made concerning athletic facilities.

In the process, it was decided to build a college-type arena for basketball and volleyball and a football field complete with artificial turf that wouldn’t get muddy in the rain.  These decisions were lauded by some and lambasted by others who said it was too much for a high school facility.

But, they built it, and they have come. 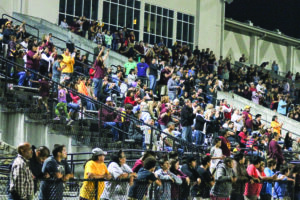 Fans pack Ray Kinsland Stadium during a home football game this past fall. Cherokee’s athletic facilities have drawn fans and events since they were constructed, along with the new school, several years ago. (SCOTT MCKIE B.P./One Feather)

Who has come, you ask?  Well, this school year alone, Cherokee hosted the Holidays on the Hardwood basketball tournament, both the boys and girls Smoky Mountain Conference (SMC) basketball tournaments, the SMC middle school cross country championship, and the SMC high school cross country championship – an event it has hosted for the past three years.  And, they are set to host the SMC track championship on Wednesday, May 4 as well as the 1A West Regional track meet on Saturday, May 14.

EBCI tribal officials are always discussing ways to bring in visitors and tourists to Cherokee.  High school athletics should be in those discussions.  The Charles George Memorial Arena was absolutely packed to the brim the night of the SMC tournament basketball finals.  I know that the Cherokee Braves Booster Club did well that night with their concessions, but I imagine many of those fans ate in a local restaurant or at the very least got gas before leaving Cherokee that night.  All of that contributes to tribal levy.

At the SMC high school cross country championship held this past fall, I was on the sidelines taking photos of the runners as they went by and overheard two parents talking directly behind me.

“This school is awesome, and I love the way they run this meet,” said one of the parents.  “I hope they keep hosting this year after year.”

Cherokee’s facilities are definitely some of the best around and are appreciated by most people including this photographer who much prefers to walk on turf than ankle-deep mud when trying to take photos after an October rainstorm.

Other schools are starting to follow suit including Smoky Mountain High School who is set to get a $915,000 artificial turf covering for their football field.  The Jackson County Board of Commissioners approved a $200,000 budget shortfall on Thursday, April 7 so that the turf could be purchased.  It will be interesting to see how their field serves that community.

David Beckham, footballing legend, summed up the need for good athletic facilities best when he said, “Kids can have great passion and great ability, but if you have the facilities for your particular sport, that can give you the inspiration to become a sportsman.”