Perry Horse, a member of the Kiowa Nation and a national advocate for the importance of education in American Indian communities, gave a talk, “Identity Development in American Indian Students,” March 31 on the UNC Asheville campus.

With an audience of 45 students, faculty, and community members, he began with a story about Black Elk, a Sioux holy man. “Black Elk was a healer – a medicine man,” said Horse. “During the time of transition from Indian life to the new life, he had a dream. In the dream, he transformed into an eagle and flew over the homeland. He saw that Indian life was disappearing – the buffalo were gone, the rituals were leaving. A voice spoke and said ‘You are going to face a tremendous amount of difficulty. Put it away and find a new strength.’ For me that ‘new strength’ is education.” 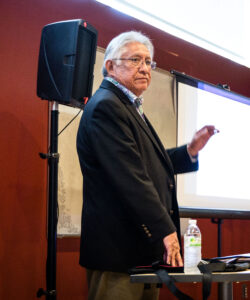 Horse, together with other Indian educators who also felt that the “new strength” was education, founded the American Indian Higher Education Consortium. Now there are 37 community colleges in the system, they are all accredited, and are keys to the vitality of sovereign nations and managing systems.

Horse was a Washington D.C. lobbyist in the 1960s when attorneys educated him on the status of Indian tribes as sovereign nations. “The lawyers told us about Article I, Section 8 which regulates commerce with foreign nations and with Indian tribes,” he said. “They shared that we had the right to form our own governments as sovereign nations and we did. Some of us are democratic, some of us are theocratic. Now we run our own schools, health care systems, everything. Sovereignty is the touchstone of Indian identity.”

To Horse, that identity includes:

“For me, being bilingual is a big part of my Indian Identity,” said Horse. “If someone says something to me in English – I can hear and understand it in the context of American culture. Sometimes I translate what was said into Kiowa and I hear the meaning in relation to Kiowa culture. There is a deep value in being able to do that.”

Trey Adcock, director of American Indian outreach and assistant professor of education at UNC Asheville, underscored the importance of Horse’s visit. “I think just his presence on campus was important as it continues to display the institution’s commitment to serving native students and provides an engagement opportunity for our Native students with someone who has immense and broad experience in higher education across Indian country,” said Adcock.

“Dr. Horse’s talk reinforced the need to work closely with the community to put in place infrastructure including more native faculty and curriculum to infuse the institution with a vision for recruiting and retaining native youth,” said Adcock. “In the closing remarks, Dr. Horse underscored the future work for educating on issues that are important to Indian people such as tribal sovereignty, economic diversification and independence, education, poverty reduction, and health care,”

Cara Forbes, a UNC Asheville alumna, said, “What I appreciated the most about Dr. Horse’s lecture was how he brought light to tribal sovereignty and resilience. I think we need to have more discussions that bring up the positive aspects of what it means to be Indigenous in this day and age. It’s a great way to begin moving forward into a brighter future.”

Horse concluded his talk by saying, “I talk to young people about Indian time. They think it is short and 100 years is long. But 100 years is short. We have to think in long time. Indians everywhere are moving from dependency, which was forced on us by the federal government for decades, to independence. The past is always there as a guide to us. Just as Black Elk said, “put it away and find a new strength.’”

Miles is the director at the UNC Asheville Center for Diversity Education.