For the past six years, the Cherokee Indian Police Department has participated in Operation Medicine Drop in an effort to encourage the proper disposal of medications.  This year’s event, held recently, was especially successful as a total of 25,681 dosage units of various medications and drugs were collected. 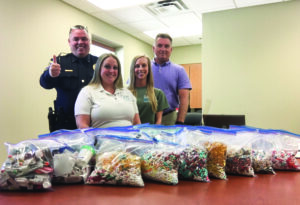 He stated that after each event, CIPD officials separate, count and log all of the medications collected and then take them to the SBI Office in Asheville.  “The SBI disposes of the medicine and medicine bottles and/or containers, by incinerating everything collected from locations across the state of North Carolina.”

Reed added, “Operation Medicine Drop has been a great resource for Cherokee Indian Police Department and our community.  Don’t simply throw your old medicine in the trash or flush it into the sewer system.  Also, keeping it at home introduces a risk of theft, abuse of the meds, and/or accidental use by children.”

A large concern for many is the possibility of such medications making their way into drinking water supplies.  Sarah Janssee, MD, PhD, MPH, a science fellow at the Natural Resources Defense Council, told WebMD, “Ever since the late 1990s, the science community has recognized that pharmaceuticals, especially oral contraceptives, are found in sewage water and are potentially contaminating drinking water.”

Locally, Cherokee water officials are taking steps to curb this.

“I guess we’re more fortunate than other locations,” said Sheila Hyatt, Cherokee Water Treatment manager.  “The sewer line runs all the way to the head of Big Cove, so looking at it from this point of view, the downstream users of the wastewater plant could potentially be affected.  On the other side of our source is the Park, so we are very fortunate.”

According to Operation Medicine Drop’s website, the following locations provide permanent drop-boxes for disposal of medications: