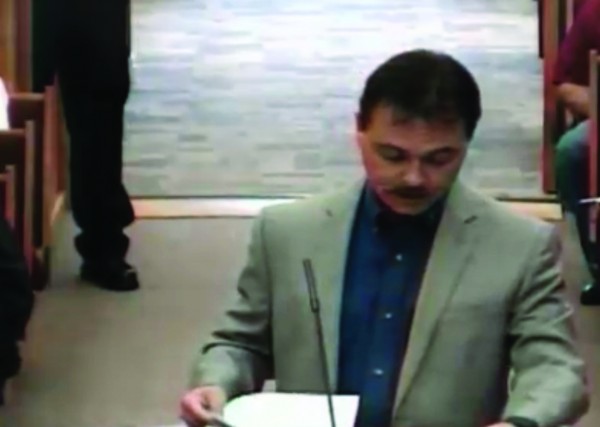 Principal Chief Patrick Lambert gives preliminary findings of a forensic audit of tribal government and programs to Tribal Council during a Budget Council session on Tuesday, April 5. (Image from Livescreen)

When the Principal Chief was called to the podium on the morning of Tuesday, April 5 to present his announcements, as is standard practice for sessions of Tribal Council (this session being a Budget Council), he had one item of importance on his list. Chief Lambert had previously stated that he is conducting forensic audits on tribal government and programs to determine any prior misuse of tribal funds and resources. He said his intent is to hold accountable those in leadership who may have stolen from or defrauded the tribe.

His announcement at April’s Budget Council included preliminary reporting on what has been found to date regarding alleged misuse of funds, and he indicated that the most complete documentation focuses on the previous executive administration.

Chief Lambert made the following comments to Tribal Council:

“We’ve talked for a while about some of the work that has been going on around the reservation on the forensic audits. I am going to give you a few minutes of review on that, but I want to first start out by saying that it only been a few short months ago, six months to be exact, that I, like you, took a solemn oath to preserve and defend the people of this Tribe. Part of that duty includes insuring that crimes committed against the people by public officials are held accountable for their actions. I deeply believe in justice just as I know that each of you do. I believe that our tribal government must be open, honest and accountable.

“That is why since taking office, I have authorized a series of forensic audits to be completed on a number of programs in departments across tribal government. The intent of these audits is to begin to rebuild a strained relationship between the government and the people that it is supposed to represent.

“Let me say that nothing herein is pointing a finger at anyone sitting in these chambers, because what I am referring to and what I am going to refer to in the next couple of minutes, is about the former executive credit cards. That is the piece that is most complete at this point. And, I want to point out the forensic audit and what that pertains to. What we found is clear fraud, wrongdoing, crimes and a failed system of checks and balances within this tribal government.

“These truths that we’ve all known well over time, but have been hidden have rocked the very foundation of this Tribe which allows for the people of this Tribe – people sitting behind me, people watching Council on TV – to consent to be governed. I am angry that the very top officials of this Tribe have mistreated our people by being greedy, selfish and unethical.

“I am beyond angry that a small minority of public officials have allowed this to happen and even took part in the behavior. I have sent auditors and fanned them out across the Boundary, collecting evidence and the proof necessary to make this a Federal case. And, I intend on taking these clear violations of the law to the FBI and the U.S. Attorney’s office. It is beyond serious. And, I am not playing games. I want those involved arrested, tried, convicted and sent to jail. Now, whether we get that done or not will be up to the Feds because that is where that information is going.

“The lives of some privileged few around here, or who felt they were privileged, are about to get seriously altered, because their crimes have finally caught up with them. No more joy rides on the Tribe’s dime…no more free lunches…no more free vacations…no more free clothes for them, their families and friends. That is, the gravy train has come to an end. Contrary to popular belief, no one is above the law; not me, not any of you. People need to know and deserve to know exactly what has happened behind closed doors in this house, behind closed doors at Qualla Housing. That is what has been happening and everywhere and anywhere tribal officials conduct business whether that is here, in the clubhouse, in the parking lot, or under the shade tree.

“As the duly elected Principal Chief of this Tribe, the Chief Executive of this Tribal Nation, I have the responsibility, codified in the governing document to dispense the day-to-day operations of the Tribe, execute and carry out the law. That is what I was elected to do, to make this place work for the people again. I started six months ago today, and I am recommitting myself to that very goal again today.

“To give you a snapshot of where we are at in the preliminary report, here is a small sampling of what has happened around here before I came into office. Thousands of dollars in cash advances were authorized by the former Executive Office paid to parties unknown, taken from local ATM machines while the Tribe was open and conducting business, clearly in violation of the law and policy. Here is a direct quote from the auditor’s preliminary report, ‘We understand that credit cards can be used in certain emergency situations as noted above. Upon our review of the transactions making cash advances, we noted that all transactions in the reviewed period occurred on a business day, including one transaction on a Tuesday, two transactions on Wednesdays, two transactions on Thursdays and one transaction on a Friday. In addition, we did not identify any of the transaction dates as holidays. As such, tribal government offices would have likely been open to release funds if necessary. Overall, the initial findings are disturbing. There appears to have been substantial misuse of tribal assets, the extent to which we do not yet know’.

“This, right here, is the preliminary report. Imagine what we will find when the full report for the past 12 years comes into view. This government is in serious need of honesty, transparency and ethics. We can only get to that place when all of the cards are on the table and cleared the deck. As I speak, right now, there are audits going on in other areas within the Tribe.

“As I speak, there are troubling preliminary findings in Qualla Housing. The inability to produce basic documents like bank statements, receipts and financial instruments are the norm over at Qualla Housing. And let’s be clear, the inability for individuals to produce documents or unwillingness to produce a document that will slow the investigation down is not going to happen, rather it increase scrutiny because where there is smoke, there is fire. The people deserve a government that is open, honest and transparent, and I am not going to stop until it is. If you have nothing to hide, then produce your documents.

“In short, our Tribe is at a crossroads. Either we are going to continue to go down the road of good old boy politics that rewards bullies, turf wars, and hides the truth from the people, or we will follow the road endorsed by the people this past election and rededicate ourselves to getting something done for the people. Folks, I have seen enough in tribal politics over the first six months I have been here and it is worse than you think. I am fighting for a Tribe that works for the people.

“That is why I, as the Principal Chief of this Tribe, invited and encouraged the FBI and the U.S. Attorney’s office onto our land. I have already forwarded several cases to them, one of which is mishandling of funds by the EMS and Emergency Management. These federal agents have full authority to investigate, interrogate, detain and arrest those involved in these crimes against our people. So rest assured, every attempt to slow down the progress we make only emboldens me to go further for the truth and for justice. I want to thank everyone here in the chambers this morning.

“I want to thank the Tribal Council for hearing me out and for the good work to report and bring current and former tribal officials to justice. Remember, no one is above the law and that includes me. I will stand accountable for everything I do everyday, just as I know you will. And, I want to thank those tribal employees who came forward with info and documents when I offered them amnesty back during my first few days in office.

“I have one thing to pass out, Mr. Chairman, and this is an indication of my seriousness and work thus far in working on these issues for the tribal government. This shows some of the things and just the efforts in trying to be conservative and being honest with what we are doing. You will see from these things in the paper that I am passing out…the first six months is all that we have to compare to…I have been here for six months…so, I took the first six months that I have been here and compared it to the first six month of each of the last four years. You will see, just for gas, food and travel, my total expenditures over a six month period has been $2,519, compared to the first six months in each of the last four years, totaling-average over $16,000 almost $17,000.  I have reduced costs in gas, food and travel by 85 percent expenditure. Travel and training for the same six months, I have reduced travel by $175,000, a 35.5 percent decrease. Payments for credit card charges made to First Citizens Bank in the first six months have been reduced by $673,000, a 63 percent reduction and the fuel cost, I have reduced by 45 percent.

“I am working hard. I will continue doing that for the full time I am here. Maybe that will just be four years, but I am going to give it everything I have got, Mr. Chairman. Thank you.”

Chief Lambert distributed a document titled “Credit Card Expenditure” to the Tribal Council, audience in chambers and in the waiting area. The paper recounted the information shared by the Chief in his address.