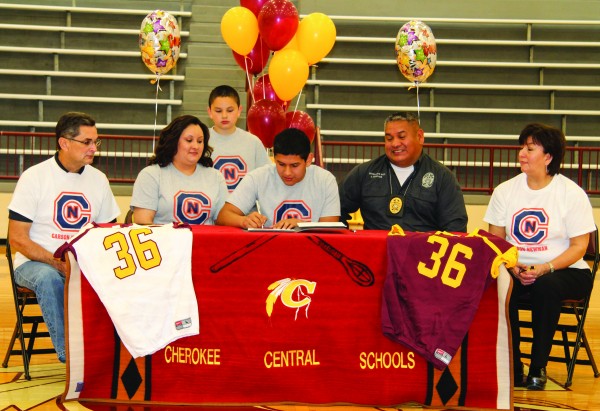 Last month, Kennan Panther, Braves senior linebacker, committed to play football this fall at Carson-Newman University in Jefferson City, Tenn.  He made it official by signing his letter of intent during a ceremony in the Charles George Memorial Arena on Wednesday, April 6.

“It’s kind of a dream come true,” said Panther.  “I’ve wanted this day since I was really little.  It’s important to me so I worked my tail off to get here, and I’m just glad I can have this day.”

Panther, who topped the Smoky Mountain Conference this past season with 158 tackles, plans to study physical education at Carson-Newman with the goal of coming back to Cherokee Central Schools to work as a coach.

Melanie Lambert, Panther’s mother, related, “I’m so proud of him.  It’s very exciting.  He’s been playing football since he was six.  When he started walking, he carried a football around with him all the time.  This has always been his dream.  We’re just extremely proud of him.  He’s worked extremely hard to get here, and I’m proud of his worth ethic.”

She added, “I want to say thank you to all of the coaches he’s ever had since youth league up to high school because he wouldn’t be where he is at today if it wasn’t for them.”

Panther is shown with his football teammates.

Cherokee High School principal Debora Foerst stated, “We love him as a student.  We love him as an athlete, both in football and in basketball.  But, today is about what his future holds for him.”

He went on to say, “He’s going to be successful because of the way he works.”

Coach Briggs praised the fact that Panther was named All-Smoky Mountain Conference for the second year in a row (2014, 2015) as well as being named a team captain in both his junior and senior years.  But, he said the best thing Panther earned in high school was the respect of his teammates.

“Very rarely does a junior become a captain as voted on by his teammates.  It’s generally a senior position.  But, he did such a good job that, in his senior year, he was elected captain again.  You can’t say anything stronger than that.”

During his tenure at Cherokee, Panther also played basketball.  Willis Tullos, Braves head basketball coach, commented, “Everyone knows what he’s meant to the school.  Today, he’s signing a football scholarship, but I want you to know that he was just as valuable to basketball as he was to football.  He didn’t score 30 points a ballgame, but the things he did were things that had to be done, and he took that role and he did it.  And, he did it full speed every night and full speed every day at practice.”

The Carson-Newman Eagles play in the Division II South Atlantic Conference.  They went 9-3 in their 2015 season which ended in a 61-59 loss to Valdosta St. in the first round of the playoffs. 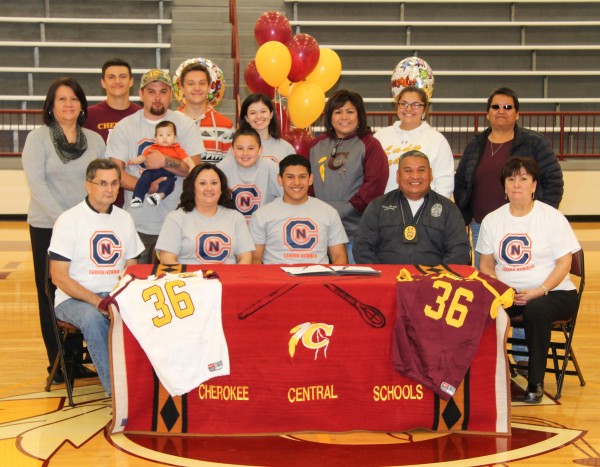 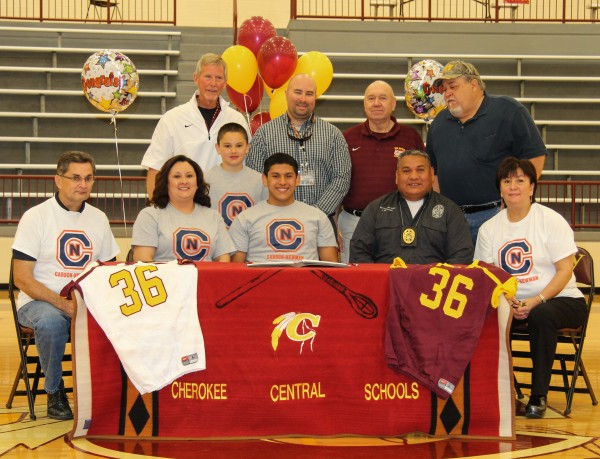 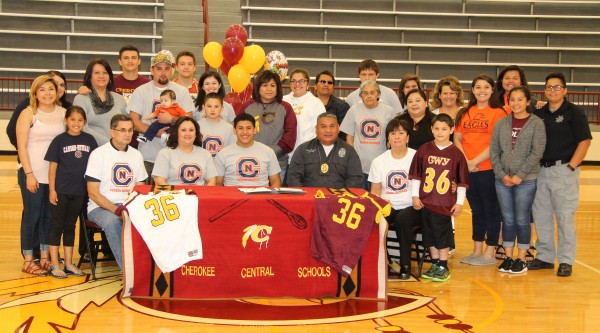