Tribal Council, the Executive Office and the three ex-gaming commissioners (Bob Blankenship, Don Rose and Sheila Brown) had legal counsel in tow for a protest hearing of the October removal of the commissioners from their posts on Thursday, March 24.  One of the first acts of then new Principal Chief Patrick Lambert was to bring charges of malfeasance against Blankenship, Rose and Brown with regard to the hiring process for a new executive director of the Tribal Gaming Commission.

After Chief Lambert resigned the post to run for the top executive positon of the Tribe, the Tribal Gaming Commission began a hiring process that led to the TGC executive director position being offered to former Principal Chief Michell Hicks. Chief Lambert asserted that protocols had not been followed and favoritism had been shown in the process of hiring former Chief Hicks. He brought forth a resolution (Resolution 4) to Tribal Council in October 2015, calling for the removal of Blankenship, Rose and Brown. The Council unanimously agreed and approved the measure and subsequent measures naming new commissioners. 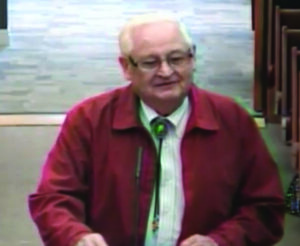 Former Tribal Gaming Commissioner board member Bob Blankenship gives testimony during a March 24 protest hearing on the dismissal of himself, Donald Rose and Sheila Brown. (Image from LiveStream)

During the March 24 session, Scott Jones, the attorney representing Chief Lambert argued that all three had ignored and/or changed educational requirements during the application process and in conflict with tribal codes. Jones also asserted that these commissioners intended to pay their selection at a higher rate of pay that would be warranted given former Chief Hicks level of education and experience, which would be another violation of standards.

Legal counsel for the three ousted gaming commissioners was former Chief of the Cherokee Nation, Chad Smith. He asserted that Blankenship, Rose and Brown had been accused and convicted without a trial. He stated that the Tribal Council was not the proper place to hear or to take action against the Tribal Gaming Commission, suggesting that it should be heard in court. Jones disagreed and pointed to Cherokee Code, which defines a process for “removal, with cause, by a majority of the Tribal Council.

At the end of the session, Tribal Council Chairman Bill Taylor stated that the Council would deliberate on March 29 at 9 am and call a session to order to vote in a decision as to whether to kill or uphold the protest submitted by Blankenship, Rose and Brown.

At approximately 9am, the Council convened in open session long enough to announce deliberation would take place on the issue and then, sighting Human Resources policy and stating that this issue was employee related, the Council went in to closed session to deliberate.

At 10:40am, the Chairman Taylor called the Council back into open session. He called for either a motion to uphold the protest or deny the protest.

At approximately 11:05am, Chairman Taylor called the Council into open session. He again entertained a motion from the Council. Painttown Rep. Tommye Saunooke motioned that the protest be denied. Wolftown Rep. Bo Crowe seconded the motion. Based on weighted vote, Council approved the motion to deny the protest by a percentage of 88 to 12. Birdtown Rep. Travis Smith abstained from voting.licy and stating that this issue was employee related, the Council went in to closed session to deliberate.