Shannon Swimmer, an EBCI tribal member, received news recently that she passed the North Carolina Bar Exam.  The Cherokee Tribal Clerk of Court since July 2014, Swimmer obtained her juris doctorate degree from the University of Kansas in 2013.

“It’s a huge relief,” she said.  “It just feels like a huge weight is off my shoulders…it feels like a whole new world of possibilities has opened up.”

“You can do a lot with a law degree, but you can do so much more once you’re licensed.” 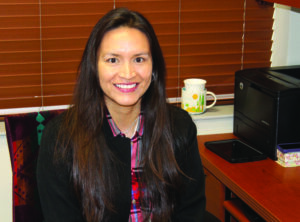 Cherokee Chief Justice Bill Boyum said he and the entire Cherokee Tribal Court staff is proud of Swimmer’s accomplishment.  “You’ve got less than 10 enrolled members that have passed the North Carolina State Bar so it’s a very small and elite group of tribal members, and we certainly need more of them.”

Swimmer studied for hours daily for months on end for the grueling bar exam.   “I think the bar exam is kind of a hazing process,” she said laughingly.  “It’s horrible.  As if law school is not bad enough, then you have to study for 10-12 hour days for months.”

Swimmer has two children, Naomi and Elijah, who have been with her through much of her educational career.  “I just hope that my kids will take something from this whole experience because they’ve been along with me for the whole ride, and I’m just hoping that they’ll be inspired by it – not so much to go to law school, but that it takes hard work and if you really want it, you can make it happen.”

She said that this dream coming true has made her reflect on the future.  “Now that I’ve worked so hard to achieve this, now I’ve got to set some new goals.  Now, I’ve got to dream bigger.”

Helping the Eastern Band of Cherokee Indians has been a goal and mission of hers for years, and she also hopes to help Indian Country as a whole.  “I’m thinking in terms of trying to expand criminal jurisdiction for tribes – to restore that to us.  That would be amazing for me to see that happen throughout Indian Country.  VAWA (Violence Against Women Act) was a small step in that direction, but there’s still just a gaping hole in that people can come here and commit crimes and we can’t do anything to them.”

Swimmer previously earned her bachelor’s degree in English from the University of Kansas in 2002 and a master’s degree in human resources from Western Carolina University in 2007.