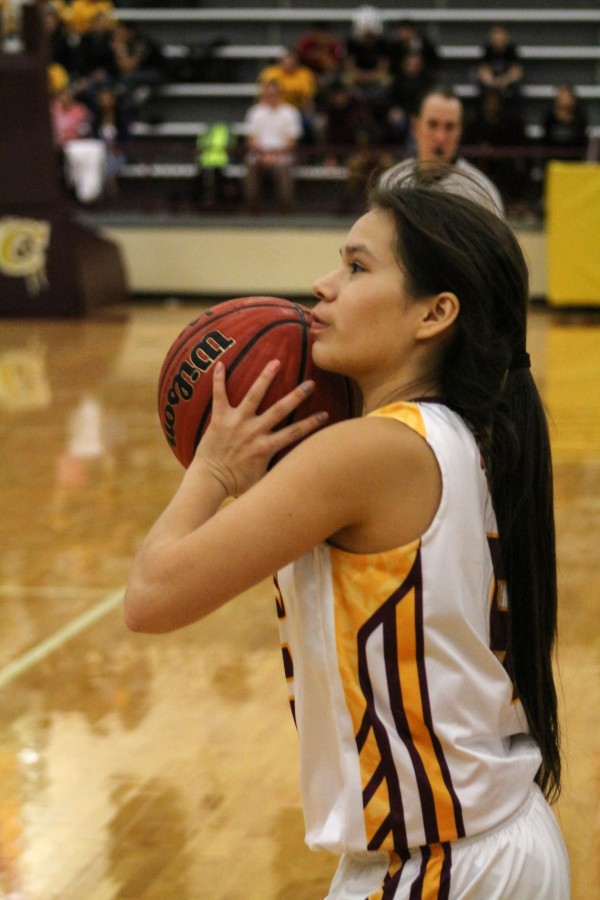 Cherokee’s LeLe Lossiah lines up for a three-point shot in the second half of Tuesday’s home game against Hayesville. Lossiah, one of four Lady Braves in double figures, scored all 12 of her points on three-point shots. (SCOTT MCKIE B.P./One Feather photos)

The Cherokee Lady Braves (14-4, 8-0) remained unbeaten in the Big Smoky Mountain Conference by draining three-point shots all night in a home game against the Hayesville Yellow Jackets (5-12, 1-6) on Tuesday, Jan. 26.  Cherokee scored 48 of its 77 points on the night with three-point shots as they rode away with a huge 77-31 win.

“I thought we played really well in the first half,” said Chris Mintz, Lady Braves head coach.  “We passed the ball really well.  Defensively, that’s probably as good as we’ve played in awhile.”

Coach Mintz said three Cherokee players were back from injury for this game.  “It’s good to be able to get them some good minutes and get them back into the flow and get ourselves ready for what’s about to come up.” 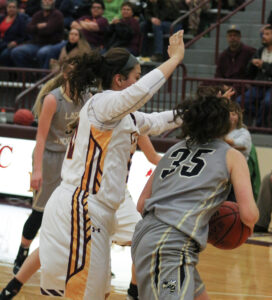 Cherokee jumped out on top early in this game in which they never trailed.  Bree Stamper, senior point guard, hit three early three-point shots as the Lady Braves moved the ball well in the first few minutes and took a 13-2 lead at the 5:04 mark of the first period.  Stamper led Cherokee with 19 points including five three-pointers.

The Lady Braves kept the pressure up extending their lead to 38-12 with just under three minutes left in the second, and they took a 43-16 lead into the locker room.

At the 6:53 mark of the fourth, Le Le Lossiah, Cherokee senior guard, hit a three-point shot to put the Lady Braves up 67-26 thereby invoking the NCHSAA mercy rule.  Lossiah was one of four Lady Braves in double figures for the game including Stamper, Tori Teesateskie 12, and Pooh King 14. 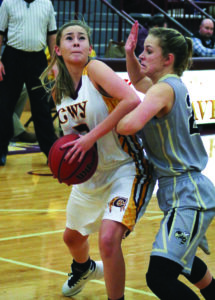 Cherokee’s Tori Teesateskie (#3) goes inside for a shot against Hayesville’s Emma Cox (#22) during a home game on Tuesday, Jan. 26. Teesateskie, who scored 12 points on the night, was one of four Lady Braves in double figures.

To view or purchase photos from this game, visit: https://onefeather.smugmug.com/SPORTS/BASKETBALL/LADY-BRAVES-BASKETBALL-201516/Vs-Hayesville-January-26/