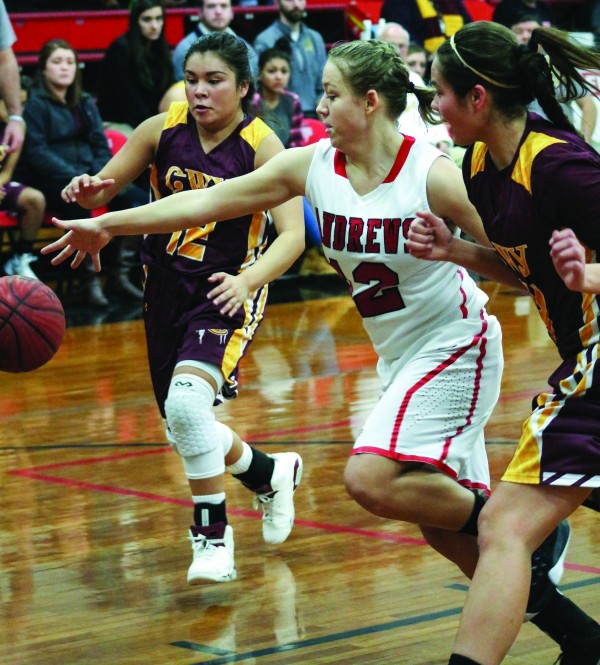 “We had a really slow start tonight, but in the second half, we tightened up and played some pretty good offense,” said Chris Mintz, Lady Braves head coach.  “Our shots finally started falling and they listened to us.  When they listen and play fundamental basketball, we do a great job.”

It was definitely anyone’s game in the first period which saw seven lead changes.  Andrews scored first and led 8-7 midway through the first.  After a few more lead changes, the Wildcats led 15-12 at the end of the first eight.

There were three lead changes in the first three minutes of the second period.  At the 4:40 mark, Cherokee grabbed the lead (20-19) and would not relinquish it again.  The Lady Braves outscored Andrews 17-8 in the second to take a 6-point (29-23) lead into the locker room.

Andrews scored the first five points of the third period to cut the lead to 29-28, but from that point, Cherokee would go on a 14-point run to lead 43-28 at the 4:15 mark.  They kept the pressure up and doubled the output of the Lady Wildcats (22-11) in the third.  LeLe Lossiah, Lady Braves senior guard, hit a three-point shot at the buzzer to give Cherokee a 51-34 lead going into the fourth period.

Cherokee extended their lead some in the fourth and went on to take the 23-point win (65-42).

To view or purchase photos from this game, visit: https://onefeather.smugmug.com/SPORTS/BASKETBALL/LADY-BRAVES-BASKETBALL-201516/At-Andrews-January-19/