ON THE SIDELINES: Kudos to Coach Tullos, a class act

He has coached for 48 years including 18 as a football coach and 30 years, on and off, as a basketball coach.  If you do the math, that equals to an average of 20 wins a season!  There are many coaches who would kill to have just a few 20 win seasons much less a 30-year career span of them. 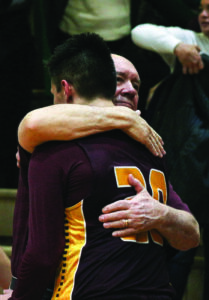 Tullos has coached the Cherokee Braves boys basketball team since 2012.  He started his coaching career at Choctaw Central in 1966, and during a stint as head coach of the Choctaw Central Lady Warriors, he led them to three state championships.  According to the Meridian Star, under his tutelage, the Lady Warriors won 85 consecutive home games from February 1995 to February 2001.

After his 600th win on Saturday night, he told me in an interview, “600 wins comes from longetivity.  God has blessed me with some great Native American basketball players.  That’s where the majority of my wins came from.  It’s been a long ride.”

When asked his thoughts on his players over the years, he related, “I’m just extremely proud of them.  I appreciate all they’ve done for me and all they’ve added to my life.  They’ve made my life a lot richer.”

Coach Tullos has won a lot of basketball games, but more importantly, he has done it with class.  He teaches his teams to play hard, to play with intensity, and to play with class and respect for themselves, the other team, the fans, and the game itself.

Like all coaches, he sometimes gets hot at a referee over a call, but he never loses control.  Unlike many coaches, he never loses his class or his respect for the game.  Coach Tullos leads by example, and that is a rare thing in this world today.

Coach Tullos said his players have made his life richer.  Sir, you have enriched the lives of literally thousands of players, fans, parents and community members.  Here’s to another 600!