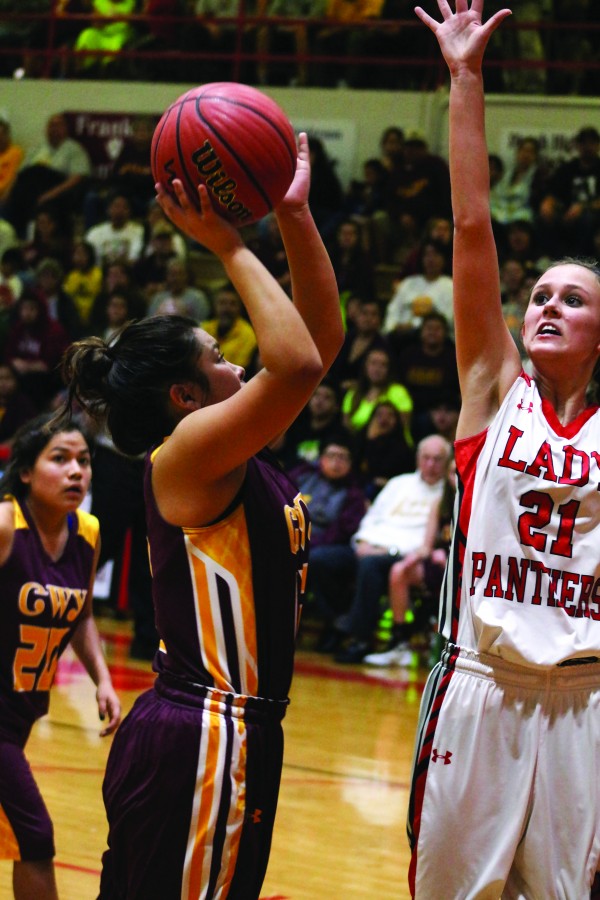 Cherokee’s Bree Stamper (#12) shoots as Franklin’s Heidi Shope (#21) tries to defend in an away game on Saturday, Jan. 16. On the night, Stamper had 11 points. (SCOTT MCKIE B.P./One Feather)

FRANKLIN – The Cherokee Lady Braves (12-4) lost a hard fought game to the Franklin Lady Panthers (9-5) on Saturday, Jan. 16 by three points (55-52).  The game saw four lead changes in the first nine minutes with the biggest lead of the day being 7 points.

“I thought it was a hard, well-played game between two good teams,” said Chris Mintz, Lady Braves head coach.  “It came down to the last shot, and we didn’t get it off.”

Coach Mintz said the game was good experience for his team that they can apply later in the season.  “I told them it was a good environment here with a good crowd.  It was against a good team.  We gave up a big size advantage, and they (Franklin) play really, really hard and really physical.  So, I told my team this is similar to what a playoff game will be like.”

The Lady Panthers got on the board first, but Cherokee answered with seven straight points to lead by five two minutes in.  The lead changed hands several more times in the first period, and with just over a minute left Timiyah Brown, Braves sophomore center, hit a short shot to put Cherokee up 15-13 as the period came to a close.

Franklin retook the lead early in the second period and would not relinquish it again.  They led by as many as seven (26-19) at one point and took a 33-28 lead into the locker room.

Neither team shot well for the first few minutes of the third period, and by the 5:00 mark it was only 33-29.  Later in the period, they got it going more and Cherokee was able to close the gap to 43-41 by the end of the third.

The Lady Braves never trailed by more than three points in the fourth period, but they were unable to take the lead.  With 28 seconds left, King drove the lane for a layup to make it 53-52.  Franklin’s Heidi Shope hit two free throws to make it 55-52.

Cherokee drove down and tried to get a shot off in the waning seconds of the game but were unable to and Franklin took the 55-52 win.

To view or purchase photos from this game, visit: https://onefeather.smugmug.com/SPORTS/BASKETBALL/LADY-BRAVES-BASKETBALL-201516/At-Franklin-January-16/