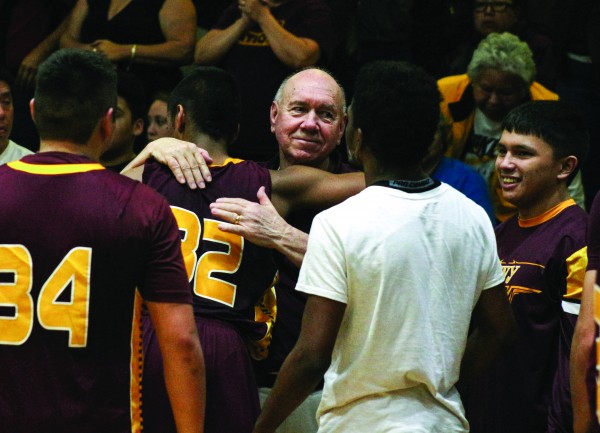 FRANKLIN – The Cherokee Braves (13-3) fought and scrapped the entire game as they topped Franklin (2-12) by a score of 84-78 to give their beloved coach a milestone win.  It was the 600th career win for Braves Head Coach Willis Tullos who was emotional after the game.

Led by Jason McMillan with 31 points, the Braves shot well from three-point land hitting 17 of 38 (45 percent) shots.  Kennan Panther and Holden Straughan both grabbed six boards and McMillan had four steals on the night.

When asked about his 600th win, he related, “Six hundred wins comes from longevity.  God has blessed me with some really good Native American basketball players because that’s where the majority of my wins came from.”

In speaking about his players now and in the past, he commented, “I’m just extremely proud of them.  I appreciate all they’ve done for me and all they’ve added to my life.  They’ve made my life a lot richer.” 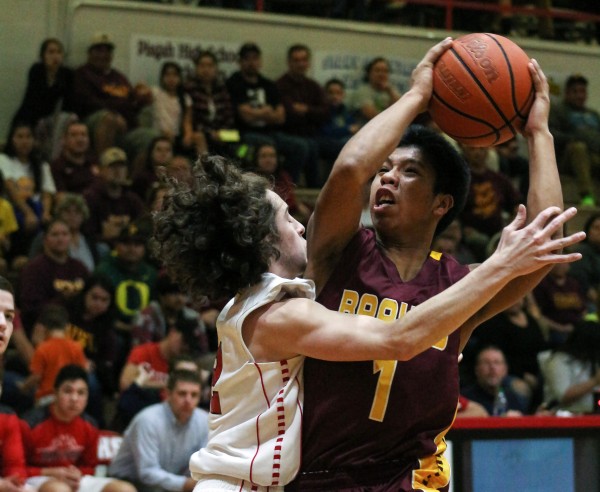 The game was hard fought the entire way.  Franklin got on the board first, but Cherokee got a couple of three-point shots and took the lead 6-2 at the 5:29 mark.  Several minutes later, they extended that lead to 21-10.  Franklin went on an 8-0 run in the last 90 seconds of the period, and Cherokee led 21-18 after the first.

The first two minutes of the third period were dead even with both teams scoring six points.  From then, Franklin roared back and outscored Cherokee 15-5 to only trail by one point with just over a minute left before the half.  The Panthers hit a basket at the buzzer to tie the game at 59-59 going into the fourth – making it a new ballgame.

Franklin scored the first basket of the fourth and took the lead (61-59) momentarily, but it was not for long as Cherokee came back and tied the game and then took the lead a minute later.  The Braves consistently kept a 3- or 4-point lead for most of the fourth period with both teams trading baskets.

Cherokee held off the Panthers for the final minutes and came away with the 84-78 win.

Franklin was led by Andrew Terrell with 30 points and Bradley Evers with 17.

To view or purchase photos from this game, visit: https://onefeather.smugmug.com/SPORTS/BASKETBALL/BRAVES-BASKETBALL-201516/At-Franklin-January-16/