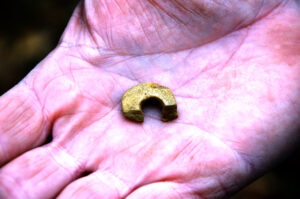 Shown is a clay sherd, probably from a tobacco pipe, found during excavations on March 9, 2015. (Photo by Holly Krake/USFS)

Gainesville, GA –  With evidence of habitation dating from 100 B.C. to A.D. 1615, the unusual site is helping to tell the story of native people in a time of tumultuous regional history.

“There is a dynamic human story heAround the year A.D. 1600, a house burned at a family farmstead in a remote mountain valley in Northeast Georgia. This March, Passport in Time volunteers from across the country will continue excavating this significant archeological discovery on the Chattahoochee National Forest.re just waiting to be told,” said Chattahoochee-Oconee National Forests Archeologist James Wettstaed. “Through this spring’s excavations we hope to uncover enough of the remains of the house to determine how it was used, its size and shape and to understand why it was abandoned.”

The Forest Service is inviting eight volunteers to assist with excavations at this site through the Passport in Time program.  Applications will be accepted online through Feb. 1, and all volunteers must commit to the full session March 7-11.

During previous excavations volunteers uncovered pottery, stone tools and the central hearth of a house. Radiocarbon dating of burned wood from the site dates the largest occupation of the site to A.D. 1600-1615. Much remains unknown in regional history between the years A.D. 1550 and 1650, making this a find of particular significance. It was not until the late 17th century that English explorers reached the area and found it occupied by the Cherokee people.

A complete photo album of the 2015 excavation is available at tinyurl.com/n6czybf.

Info: Get the latest forest news and alerts by texting ‘follow chattoconeenf’ to 40404or following them on Twitter @ChattOconeeNF