BASKETBALL: Three Braves in double digits in win over Swain 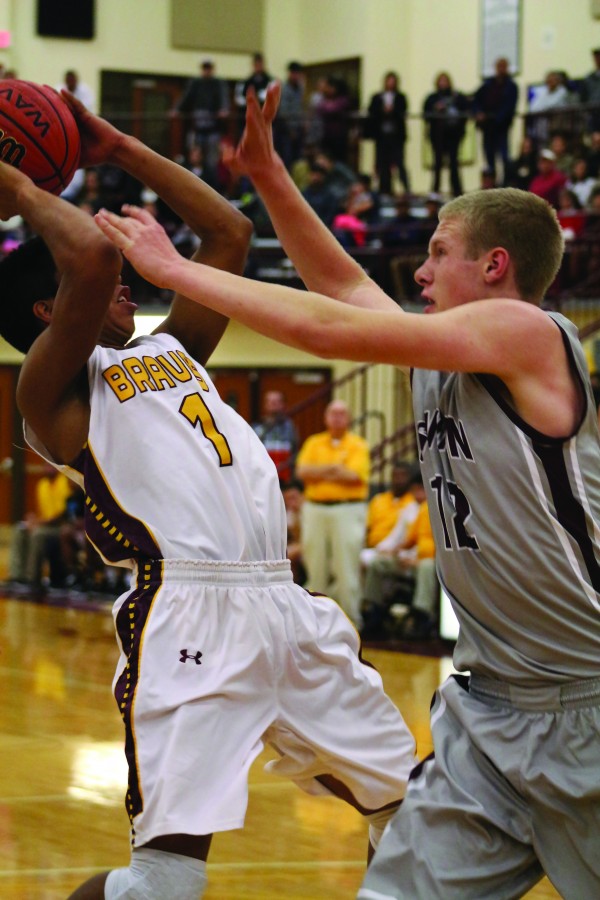 Cherokee’s Jason McMillan, senior guard, goes for a shot over a Maroon Devils player during a home game on Tuesday, Jan. 12. McMillan led Cherokee with 32 points and 6 rebounds. (Note: Swain did not have a #12 on their roster.) (SCOTT MCKIE B.P./One Feather photos)

The game was tight in the first two periods, but the Braves pulled away with a huge third period outscoring Swain 34-18.  “We picked up our intensity,” Tullos said of the Braves’ play in the third.  “We just had to quit stumbling and staggering around and play with some intensity and get focused, and that’s what they did.  When we play with that kind of intensity, we’re pretty good, and when we don’t, we’re not.” 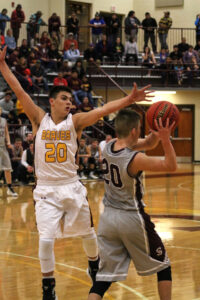 The first period saw three lead changes and was tight the whole eight minutes.  Swain scored first followed by six unanswered by Cherokee – which represented the largest lead of the first period.  Swain took the lead back 12-9 at the midway point and kept the lead until Day hit a three-point shot with 1:03 left to tie the game at 22-22.  McMillan drove the lane for a two-point shot at the end of the period and Cherokee retook the lead 24-22.

The third period was tight for the first few minutes, but then Cherokee began to open it up some.  Three minutes in, Cherokee had extended its lead to 59-51.  They kept going and had a huge 32-point period to take a 81-62 lead into the final eight minutes.

Cherokee got a lot of bench play in the fourth period and Swain actually outscored them 18-17, but the Braves held on for the 18-point victory (98-80).

To view or purchase photos from this game, visit: https://onefeather.smugmug.com/SPORTS/BASKETBALL/BRAVES-BASKETBALL-201516/Vs-Swain-January-12/