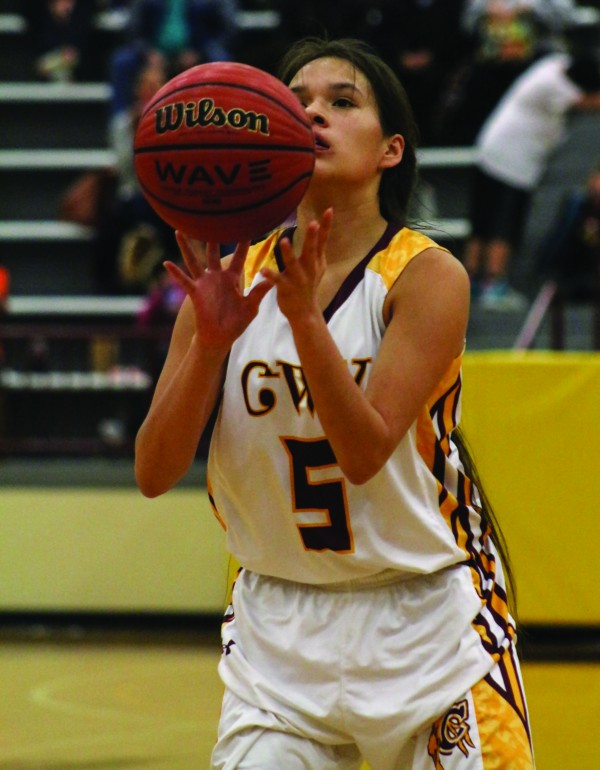 LeLe Lossiah led Cherokee (11-3) over Swain on Tuesday, Jan. 12 as the Lady Braves remained unbeaten in the Big Smoky Mountain Conference.  The senior guard scored 19 points, including five three-pointers, as Cherokee beat the visiting Maroon Devils 57-44 in a scrappy game at home in which Cherokee never trailed.

“I don’t think we played very well,” said Chris Mintz, Lady Braves head coach.  “I know we didn’t execute very well, and our rebounding was not what we needed it to be.  We got lucky to get out of here with a ‘W’.”

“We’re almost getting enough people healthy to have five-on-five at practice so that’ll make it a little bit easier.  These guys are battling.  We didn’t play our best game tonight, but these guys played as hard as they could all night so that’s all you can ask for.” 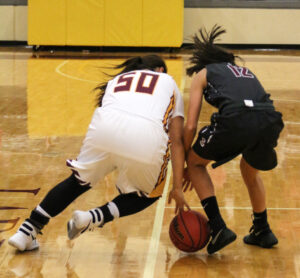 Lossiah hit two three point shots early in the second period and Cherokee extended its lead to 22-8 just over a minute in.  The second period ended up being almost even with Cherokee outscoring Swain 12-11 and taking a 27-16 lead into the locker room.

The third period got much closer as the Lady Maroon Devils went on a 14-5 run to cut Cherokee’s lead to 2 points (32-30) at the 3:23 mark.   But, Cherokee’s defense stiffened and held Swain to only 2 points in the last three minutes.  In the last thirty seconds of the third, Lossiah hit a three pointer and Shelby Wolfe made a short jumper to give Cherokee a 41-32 lead.

The Lady Braves outscored Swain 16-12 in the final eight minutes to take the 57-44 win.

To view or purchase photos from this game, visit: https://onefeather.smugmug.com/SPORTS/BASKETBALL/LADY-BRAVES-BASKETBALL-201516/Vs-Swain-January-12/