Tribal Council recognized the Warriors of Anikituwah during its regular session on Thursday, Jan. 7.  Painttown Rep. Marie Junaluska gave a presentation on the Warriors in which she stated, “Over the past ten years, they have inspired Cherokee people with their image of strength and pride, bringing back the Welcome Dance from the 1700s and other traditional dances. The AniKituhwagi Warriors have been outstanding cultural ambassadors for the Eastern Band, with the sponsorship of the Museum of the Cherokee Indian, and I want to recognize them here today.”

Principal Chief Patrick Lambert commended them and said, “Thank you for your service to the Tribe and the nation.” 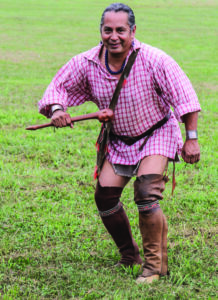 John “Bullet” Standingdeer, one of the original members of the Warriors of Anikituwah, is shown dancing at a past year’s Kituwah Celebration. (SCOTT MCKIE B.P./One Feather)

Several members of the Warriors addressed the Council. All thanked Rep. Junaluska and the Council for the opportunity to represent the Tribe.

Taylor said, “A lot of native cultures are dying. They may have powwows, but this tradition belongs to us, the Cherokees. I hope people remember not our names, but what we did.”

Ledford commented, “I want to give all the recognition to the old ones who came before us.  If it weren’t for those in the past, I wouldn’t be able to stand here right now.”

John Grant Jr. emphasized the importance of passing traditions on to the youth of the Tribe and said, “We need to make sure that the fire that is AniKituwah doesn’t go out.”  He further emphasized the importance of everyone learning Cherokee language. “This is too great a burden to put just on the shoulders of the young people at the New Kituwah Academy.  We should all be trying to learn Cherokee language.  It’s 2016 and no one is going to wash your mouth out with soap for speaking it.”

Barbara R. Duncan, education director at the Museum of the Cherokee Indian, sponsor of the group, recounted their achievements.  “The Warriors of AniKituhwa have given more than 250 performances, for more than 300,000 people, and they have traveled thousands of miles.  In addition to performances here for the Cherokee Central Schools, Fall Fair, Kituwah Celebration, and Red Clay Reunion, they have taken Cherokee culture to ten states, Washington D.C., and Montreal Canada.  Their performances have been welcomed at the National Museum of the American Indian, and the Smithsonian Museum of Natural History in Washington DC.  They have performed for the Seminoles, Creek Nation, Poarch Creek Band, Cherokee Nation of Oklahoma and The United Kituwah Band. They have danced for meetings of the United South and Eastern Tribes and the National Congress of American Indians.   Their ten-year partnership with Colonial Williamsburg has led to the establishment of a full-time Cherokee person there, with Cherokee programs every week as part of the story of American history.”  Duncan also assisted with the original research for the group’s dances and 18th century clothing.

The group performs at festivals, historic sites, schools, and cultural events.  Their one-hour program includes dancing, information on history and culture, and audience participation.  They can also provide demonstrations of 18th century clothing, weapons, moccasin making, Cherokee language, and the stickball game.  They are available for visiting artist residencies.

Through their sponsor, the Museum of the Cherokee Indian, the group has received funding from the Eastern Band of Cherokee Indians, the Cherokee Preservation Foundation, and the North Carolina Arts Council. Most of their funding comes from the venues where they perform.

For more information on this group, their history, and their performances, go to https://www.cherokeemuseum.org/learn/the-warriors-of-anikituhwa/. They have a Facebook page and several videos on YouTube.  For booking, contact Barbara R. Duncan, Education Director at the Museum of the Cherokee Indian.  Email: bduncan@cherokeemuseum.org.